Trial has begun in a case that inflamed the debate over undocumented immigration and "sanctuary cities."  As Emily Shapiro reports for ABC News, the murder trial began yesterday for an undocumented immigrant accused of shooting and killing a young woman on a San Francisco pier two years ago.

Kate Steinle, 32, was shot and killed while walking on a pier with her father on July 1, 2015. The suspect, Jose Ines Garcia Zarate claims he found the gun wrapped in a T-shirt under a bench and it went off accidentally, The Associated Press reported. But prosecutors argue he carelessly pointed the weapon at people. The Bureau of Land Management has said that the gun belonged to one of their enforcement rangers and was stolen from a federal agent's car.

Originally from Mexico, Zarate had been deported several times and has previous convictions for re-entry after deportation. He is charged with second-degree murder in Steinle's death and has pleaded not guilty.

Before the killing, he had been released from a San Francisco jail after a minor drug charge was dismissed. While U.S. Immigration and Customs Enforcement had issued a detainer for Zarate, he was released under the city's "sanctuary law."

Steinle's death became the center of a national immigration debate, and during the 2016 presidential campaign, now-President Donald Trump invoked the case as part of his justification for building a wall on the U.S.-Mexico border.

According to the San Jose Mercury News, the jury, which was selected last week, comprises six men and six women, including three immigrants.  The trial is expected to take between six weeks and two months. 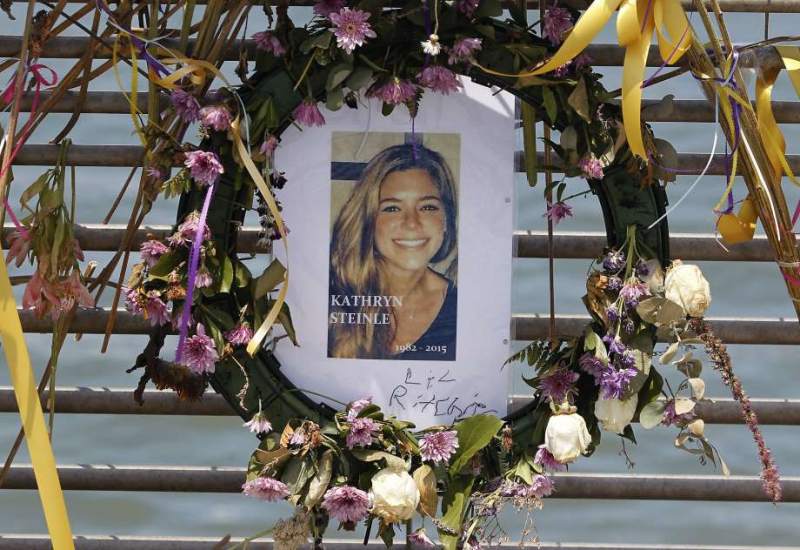 In this Friday, July 17, 2015 photo, flowers and a portrait of Kate Steinle are displayed at a memorial site on Pier 14 in San Francisco.