Extreme Vetting and the Muslim Ban 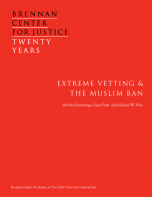 The Brennan Center for Justice has a new report looking critically at President Trump's Muslim bans.  In "Extreme Vetting and the Muslim Ban," Harsha Panduranga and Faiza Patel, Michael Price see the White House's three attempts at a travel ban and "extreme vetting" policies for certain visa applicants as part of an overall strategy for closing off the country to particular visitors, especially Muslims. This report identifies at least three key failings of Trump's travel and vetting policies: their failure to enhance national security, engendered in part by the administration's perhaps willful blindness to the fact that the U.S. already has one of the world's most rigorous visitor screening systems; their discriminatory nature and reliance on unproven methodologies that target particular groups; and their real costs, including economic harm, to the American people.