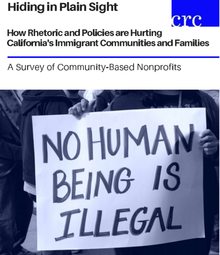 The California Reinvestment Coalition released a new report this week, focused on how anti-immigrant rhetoric and policies are jeopardizing the health, financial security, and safety of immigrant families. The report is based on a survey of community-based nonprofits throughout the state of California, and was also the topic of a webinar earlier this week where nonprofit leaders shared a number of strategies they’ve implemented to better support immigrant families they work with.

“It’s clear from our survey results that the rhetoric and policies coming out of Washington DC are already hurting immigrant families here in California,” explains Paulina Gonzalez, executive director of the California Reinvestment Coalition. “Nonprofits shared with us that the immigrants they work with every day are understandably afraid, and that’s impacting their daily decision-making around things that many of us take for granted- like whether or not to open a bank account or drive our kids to school.”

She adds: “The good news is that local nonprofit organizations are meeting these new challenges head on, by equipping people with information, connecting them with legal and financial resources, providing scholarships for DACA renewals, helping them to prepare for financial emergencies, hosting know your rights training, and serving as strong allies by standing up with, and on behalf of, immigrant families. In addition to the policy recommendations in the report, we’re also calling on foundations, banks, and other corporations who do business in California to increase their efforts to support these communities during this incredibly chaotic time.”

Top-line findings from the 40+ organizations who responded to the survey:

More than 2/3 of respondents expressed concerns about decreased family incomes as a result of actual deportations or fear of deportations causing people to stop working.

The majority of respondents (62%) are concerned that the current rhetoric and proposed budget policies relating to immigration will lead to less funding for critical services.

A majority of survey respondents (55%) have either seen a drop in the number of clients seeking services since the election or are concerned that this will happen.

The California Reinvestment Coalition will be releasing three new guides in the next month focused on how banks can better support and partner with immigrant families during this tumultuous time, including through offering safe bank accounts, providing loans to small business owners and to pay for naturalization costs, increased philanthropy to nonprofits servicing immigrants, and more.

Excellent article! We are linking too this particularly great post on our site. Keep up the great writing