Children: Amid a Growing Court Backlog Many Still Unrepresented

New data is in from TRAC.  Despite a dramatic drop-off in new Immigration Court cases involving unaccompanied children (UAC) this year, the backlog of pending children's cases has continued to rise. The latest case-by-case court data show that the court backlog of these children's cases reached an all-time high of 88,069 at the end of August 2017. The current backlog of 88,069 represents four times the number of new UAC cases that reached the court during the first eleven months of FY 2017.

Litigation on some UAC cases necessitate complex applications for relief that may involve other government agencies and can stretch on for several years. There are still 16,693 cases pending that began during FY 2014. However the largest number of UAC cases still pending were initiated during the last two years.

Previous research has shown that individuals who have an attorney have much higher odds of success in Immigration Court. Despite many initiatives to increase the availability of representation in children's cases, still nearly three out of ten children whose cases began during FY 2015 were unrepresented. (A total of 61 percent of these cases have already been decided.) Although with additional time some children may be able to locate attorneys, the current figure rises to four out of every ten children who remain unrepresented for cases that began during FY 2016, and jumps to three out of four for cases that originated during FY 2017. 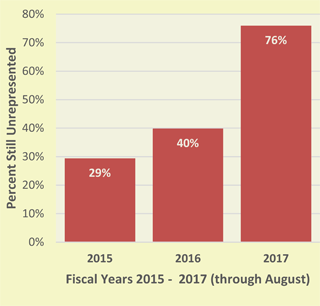