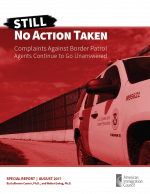 U.S. Customs and Border Protection (CBP) has a long history of violating constitutional and other rights of both immigrants and U.S. citizens. In particular, agents of the Border Patrol (a component of CBP) are known for routinely overstepping the boundaries of their authority by using excessive force, detaining people under inhumane conditions, and using coercion and misinformation to remove people from the United States.

Not only do abuses occur with regularity, but they rarely result in any serious disciplinary action. Our analysis finds that the overwhelming majority of complaints regarding misconduct result in “no action,” revealing how little progress CBP has made over the past few years in its efforts to improve accountability.

Thanks for finding time to write this auspicious article out of your tight schedule. I sincerely appreciate your effort. Once again; thanks! Also read here easy infoblog