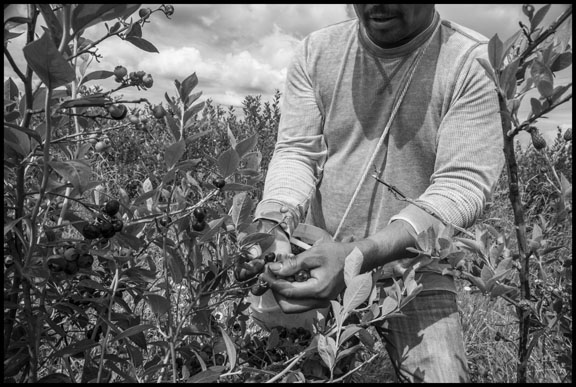 David Bacon in the American Prospect tells about how a farmworker's death in the hot fields of Washington state has prompted his fellow workers to put their livelihoods in jeopardy by going on strike, joining a union, being discharged - and risking deportation.

Honesto Silva Ibarra died in Harborview hospital in Seattle on August 6.  Silva, a married father of three, was a guest worker - in Spanish, a "contratado" - brought to the United States under the H2-A visa program, to work in the fields.

Miguel Angel Ramirez Salazar, another contratado, says Silva went to his supervisor at Sarbanand Farms last week, complaining that he was sick and couldn't work.  "They said if he didn't keep working he'd be fired for 'abandoning work.' But after a while he couldn't work at all."

Silva finally went to the Bellingham Clinic, about an hour south of the farm where he was working, in Sumas, close to the Canadian border.  By then it was too late, however.  He was sent to Harborview, where he collapsed and died.

Silva's death pushed the contratados into action.  They organized and protested, and when they were fired for it, they joined Washington State's new union for farmworkers, Familias Unidas por la Justicia.  As this article is being written, 120 H2A workers are sitting in tents on a patch of land near the ranch where they worked, protesting their treatment and demanding rights for guest workers.

On the website of CSI Visa Processing, which recruited Silva, Ramirez and others to work at Sarbanand Farms, a statement reads: "The compañero who is hospitalized, the cause was meningitis, an illness he suffered from before, and is not related to his work."  Ramirez and other workers doubt that explanation.  Silva had been working in the U.S. since May, and did not arrive with symptoms of meningitis.  Instead, they insist that it was the consequence of increasingly bad conditions at the ranch.

According to Ramon Torres, president of Familias Unidas por la Justicia, H2-A workers at Sarbanand Farms had been complaining for weeks about bad food, temperatures in the 90s with no shade, warm drinking water and dirty bathrooms in the fields.  In the last two weeks, the air near the border became smoky from forest fires just to the north in Canada, making it hard to breathe.  Some workers fainted amid the blueberry plants where they were picking.