With Arpaio Pardon, Trump Shows NO Commitment to Civil Rights 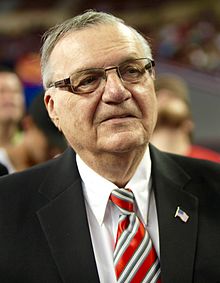 For more than two decades, the controversial sheriff struck fear into the hearts of immigrants and U.S. citizens of Mexican ancestry in Arizona. A respected federal court judge appointed by President George W. Bush, Murray Snow, found that Arpaio, and his sheriff’s office, aggressively — and lawlessly — used racial profiling to enforce immigration laws.

Defeated for re-election in 2016, the controversial sheriff had made a name for himself in unabashedly claiming that he wanted to aggressively enforce U.S. immigration laws. But publicity stunts showed cruelty and insensitivity toward inmates under his protection.

Arpaio, for example, made inmates wear pink underwear and suffer the heat outdoors in scorching Arizona summers. Undocumented immigrants were forced to live in a segregated “tent city” that Arpaio bragged was a “concentration camp.”

The nation has faced similar civil rights issues raised by Arpaio’s refusal to follow the rule of law. Southern segregationists in the 1950s and 1960s expressed views not that different from those expressed by contemporary alt-right activists and white supremacists. They, too, had to be schooled on the rule of law.

In one of the most famous examples, President Eisenhower in 1957 deployed federal troops to enforce the Supreme Court’s decision outlawing segregated schools in Brown v. Board of Education (1954) so that African-American children, known as the Little Rock 9, could attend Little Rock Central High School in Arkansas.

Presidential pardons at times have been controversial. President Ford’s pardon of President Nixon for his role in the Watergate cover-up is a leading modern example. However, an American president never has pardoned a person who repeatedly, willfully and intentionally refused to comply with court orders aimed at ending mass violations of the civil rights of racial minorities.

In addition to the civil rights violations, Arpaio undermined the fundamentals of the legal process. For a law enforcement officer to be found liable for criminal contempt is serious business. This explains why Attorney General Jeff Sessions reportedly told Trump that he could not drop the charges against Arpaio. And it explains why Republicans and Democrats alike are condemning the Arpaio pardon.

Trump has founded his presidency on enforcing the U.S. immigration laws. But his pardon of Arpaio is inconsistent with the rule of law. The president justified the pardon by saying that the sheriff “was just doing his job.” However,“his job” as a law enforcement officer does not include breaking the law.

First, Arpaio was found to have engaged in a pattern and practice of racial discrimination in law enforcement against Latinos. Second, Arpaio was punished for intentionally violating court orders. Both offenses are antithetical to the rule of law. The efforts to nullify a court order vindicating the civil rights of vulnerable minorities are precisely the kinds of actions of the Southern segregationists of the 1950s and 1960s.

We are living in a time of deep political division and disturbing challenges to our Constitution. The nation has seen civil unrest unfold as violent clashes, including in California this past weekend, take place between white supremacists and counter-protesters. Trump and his followers have inflamed passions by claiming that immigration laws must be enforced with impunity.

In pardoning Arpaio, however, the president does not appear to be equally committed to enforcement of civil rights laws. He has demonstrated this through his pardon of Arpaio, as well as in his response to the troubling events in Charlottesville.

Trump seems to be siding with those opposed to federal civil rights law — and against the rule of law — by his continued attacks on the independence of the judiciary. That message is not what the nation needs at this time.

Very nicely done. Your show schedule gave me the info on some shows I was wondering about. I visited your web site today and found it very interesting and well done. I can tell you have put a lot of work into it. Thank you for the listing on your web page. You have a good looking web site Your site is exactly what I have looking for!! Keep up with the good work.