APNewsBreak: Grandmother in travel ban flap arrives in US 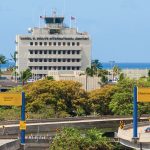 Ismail Elshikh, the imam of a Honolulu mosque, said his 52-year-old mother-in-law Wafa Yahia received approval from the U.S. government several weeks ago. She arrived in Honolulu last night on a flight from San Francisco in a trip that started in Lebanon.

Elshikh is a plaintiff in Hawaii's challenge to the travel ban. The lawsuit argues that the ban prevented his Syrian mother-in-law from visiting.    The case is currently before the U.S. Supreme Court.