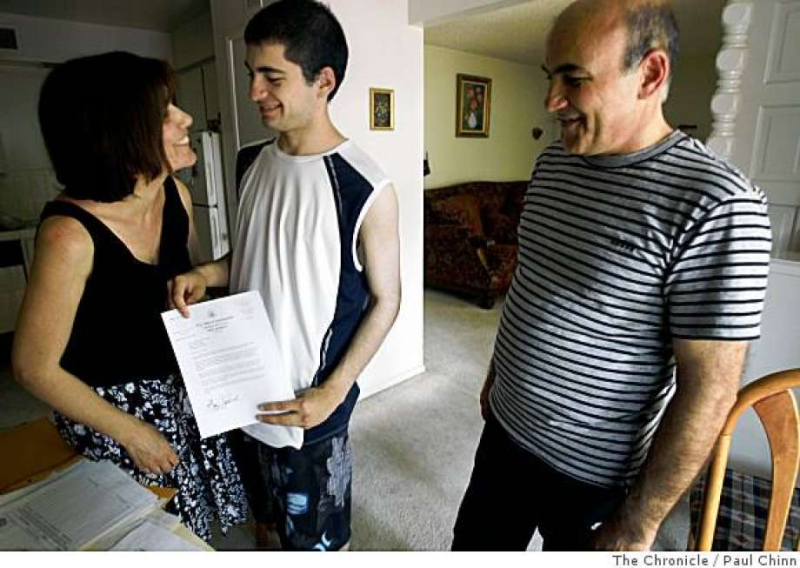 AM and his parents, photo SFGate

Arthur Mkoyan's story gripped me from the moment I first read it. (Look here and here for our prior coverage.) A high school valedictorian, he was accepted into U.C. Davis. Yet he was also slated for deportation days after his high school graduation when his parents' case for asylum was denied for the last time. Despite suffering in their native Armenia, courts were not convinced that changed country conditions wouldn't render it now safe for the family to relocate.

At this point, Senator Feinstein stepped in and presented a private bill to Congress - seeking individualized relief for the three. (Arthur does have a younger brother but he was born in the U.S. and so not subject to deportation with the rest of his family.)

Senator Feinstein's bill didn't pass. But just by presenting the bill, she achieved an effective stay of deportation for him. And with that stay, Arthur was able to attend Davis. He even did so a full scholarship donated by Sherry Heacox - just a woman who heard his story and wanted to help.

Every student of mine for the past several years has heard the story of Arthur. He's my go-to poster boy for private bills. And I talk to them about why Senator Feinstein didn't just submit the private bill once but instead kept on submitting it legislative session after legislative session. Even though it's never passed, the very existence of the pending bill has continued to provide a stay of deportation for the family.

But the legal effect of those pending bills may change, as BuzzFeed reports. On May 5, the Acting Director of ICE (Thomas Homan) wrote a letter to the chair of the Judiciary Committee. In that letter, he stated that ICE would no longer stay deportations for those with pending private bills (there are around 30 pending) unless ICE received a written request from the chair of the House or Senate judiciary committees, or an appropriate subcommittee. Homan further said that ICE would only grant one stay of removal for a maximum of six-months, with the possibility of a one-time 90-day extension thereafter.

We'll have to see how these changes play out. But it's certainly hard to understand why the individuals and families affected by these 30-odd bills have suddenly become an enforcement priority.