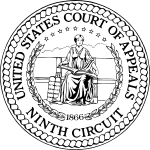 It is a big immigration news day!

Agreeing with the Fourth Circuit, the Ninth Circuit today in a per curiam opinion (Michael Daly Hawkins, Ronald M. Gould, and Richard A. Paez) joined the Fourth Circuit and delivered the Trump administration's revised travel ban another setback.  Here is the introduction (and conclusion):

We are asked to delineate the statutory and constitutional limits to the President’s power to control immigration in t his appeal o f the district court’s order preliminarily enjoining two sections of Executive Order 13780 (“EO2” or “the Order”) , “Protecting the Nation From Foreign Terrorist Entry Into the United States. ” The Immigration and Nationality Act (“INA”) gives the President broad powers to control the entry of aliens , and to take actions to protect the American public. But immigration, even for the President, is not a one - person show. The President’s authority is subject to certain statutory and constitutional restraints. W e conclude that the President , in issuing the Executive Order, exceeded the scope of t he author ity delegated to him by Congress . In suspending the entry of more than 180 million nationals from six countries, suspending the entry of all refugees, and reducing the cap on the admission of refugees from 110,000 to 50,000 for the 2017 fiscal year, the P resident did not meet the essential precondition to exercising his delegated authority:  The President must make a sufficient finding that the entry of these classes of people would be “detrimental to the interests of the United States. ” Further, the Order runs afoul of other provisions of the INA that prohibit nationality-based discrimination and require the President to follow a specific process when setting the annual cap on the admission of refugees. On th ese statutory bases, we affirm in large part the district court’ s order preliminarily enjoining Sections 2 and 6 of the Executive Order.

The court rested its conclusion on statutory grounds -- that the requirements of Immigration and Nationality Act § 212(f), 8 U.S.C. § 1182(f) had not been satisfied -- and did not reach the Establishment Clause holding of the district court.  At the outset, it found that standing was established and that the case was "ripe" for review.

The court emphatically rejected the notion that the travel ban was not subject to judicial review:  "Whatever deference we accord to the President's immigration and national security judgments does not preclude us from reviewing the policy at all. [citations omitted] . . . . We do not abdicated the judicial role, and we affirm our obligation `to say what the law is' in this case.  Marbury v. Madison, 5 U.S. 137, 177 (1803)." (Slip opinion, p. 32).  The court stated that "[i]n conclusion, the Order does not offer a sufficient justification to suspend the entry of more than 180 million people on the basis of nationality."  Slip op., p. 43.

The court summarizes its order in this concluding paragraph:

We affirm in part and vacate in part the district court’s preliminary injunction order. As to the remaining Defendants, we affirm the injunction as to Section 2(c), s uspending entry of nationals from the six designated countries for 90 days; Section 6(a), suspending [the U.S. Refugee Program] for 120 days; and Section 6(b), capping the entry of refugees to 50,000 in the fiscal year 2017. We vacate the portions of the injunction that prevent the Government from conducting internal reviews, as otherwise directed in Sections 2 and 6, and the injunction to the extent that it runs against the President. We remand the case to the district court with instructions to re-issue a preliminary injunction consistent with this opinion. (footnote omitted).