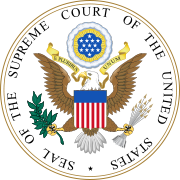 With all the immigration action at the Supreme Court (click here for the latest), it should be no surprise that SCOTUSBlog is running an immigration symposium.

The first installment is from Shoba Sivaprasad Wadhia and explains why the reargument and ultimate decision in Jennings v. Rodriguez matters.  Her conclusion:

"It is uncertain how the Supreme Court will decide Jennings, but it should follow the 9th Circuit, which held that “the government must provide periodic bond hearings every six months so that non-citizens may challenge their detention ‘as the period of … confinement grows.’” The 9th Circuit decision should be a guide to the Supreme Court, because it is well reasoned, and it captures the history of how courts have handled and considered fundamental legal questions in the space of immigration detention."

The second installment was written by NancyMorawetz.  She notes that immigrants have prevailed over the government in a series of removal cases, including earlier this Term in Esquivel-Quintana v. Sessions:

"Esquivel-Quintana shows how the executive branch’s positions can be dead wrong and that immigrants challenging their deportation can have viable claims and indeed may ultimately be vindicated by a unanimous Supreme Court. One can only hope that the Supreme Court will take that lesson to heart when it rehears Jennings v. Rodriguez in the fall. At issue in Jennings is whether an immigrant such as Mr. Esquivel-Quintana should be subjected to prolonged detention without any chance of release while pursuing a challenge to his deportation. The very fact that the Supreme Court has issued so many favorable rulings for immigrants makes clear that immigrants being detained are hardly destined to be deported simply because the government chooses to charge them as deportable. Understanding that basic fact is essential in achieving a fair result in Jennings."