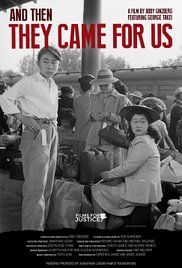 And They They Came for Us

This is a documentary film by Abby Ginzberg. The documentary ties together the internment of Japanese Americans during World War II with current moves towards instituting a Muslim registry. The film, which opens in August, demonstrates the importance of speaking up against any efforts to register or ban Muslims today. Knowing our history is the first step in making sure we do not repeat it. Click here for a preview.