End of the Supreme Court's 2016 Term: Travel Ban, Other Immigration Cases Before the Justices 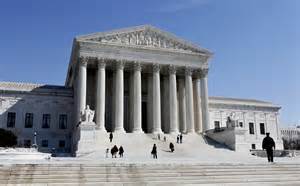 Immigration professors are looking at a very interesting end to the Supreme Court's 2016 Term.  There are likely decisions in several "big" immigration cases, including Jennings v. Rodriguez, a class action challenge to immigrant detention, and Sessions v. Dimaya, a void for vagueness challenge to a criminal removal provision.

And things are heating up before the high court in the travel ban cases.  Amy Howe on SCOTUSBlog explains the efforts by the Trump administration to secure Supreme Court review of the Fourth Circuit’s invalidation of the bulk of President Trump's revised travel ban and to lift the court order barring the government from putting the ban into effect. In so doing, the Trump administration also asked the Court to intervene in a second challenge to the revised travel ban, which was decided yesterday by the Ninth Circuit.  The Ninth Circuit had not yet issued its decision in that case when the government sought Supreme Court review.

The Fourth Circuit invalidated the revised travel ban on constitutional (Establishment Clause) grounds.  The Ninth Circuit reached the same result but relied on statutory grounds.  There is no conflict in the outcomes of the cases that would seem to justify Supreme Court review.  However, the cases raise serious and important legal questions that could convince the Court to accept review.

Stay tuned as it will be an exciting end of the Term!