Peter Margulies: The Fourth Circuit and the Travel Ban Redo 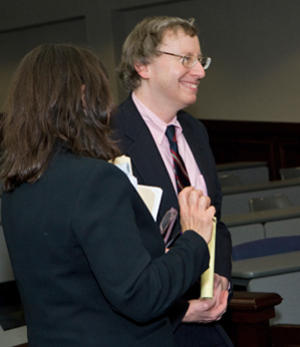 On Lawfare, Peter Margulies expresses skepticism about the Fourth Circuit's reliance on the Establishment Clause to enjoin the travel ban in International Refugee Assistance Project v. Trump.  I can't really tell what Margulies thinks of the ultimate outcome of the case.  I do understand him to (1) be skeptical of the Establishment Clause rationale for invalidating the travel ban; and (2) worried about the court "cherry-picking Donald Trump's campaign utterances and subsequent statements."  On the second point, there sure were many, many anti-Muslim statements in Trump's utterances alone; to me, it is hard to say that any "cherry-picking" went on in the court's analysis.

Why the Establishment Clause is a Bad Fit for Immigration Law

Invoking the Establishment Clause in immigration cases is an invitation with more peril than promise. I should state first that, as a participant in our political community, I was appalled by candidate Trump’s call for a Muslim ban. I viewed the original EO as deeply flawed on legal and policy grounds. From a policy standpoint, the second EO is still deeply flawed. Moreover, I share the concerns of those who worry that it could presage a longer-term retrenchment in the U.S. commitment to legal immigration and refugee protection. That said, I see little precedent in U.S. immigration law for granting judicially enforceable legal protections to noncitizens who have no ties to the United States. (Kerry v. Din doesn’t go very far in this direction, since Kennedy and Alito merely “assumed” that the Due Process applied, and then denied the noncitizen and his citizen spouse the modest relief they requested: identifying a particular subsection in 8 U.S.C. 1182’s terrorism-related inadmissibility grounds.)

For me, the Establishment Clause is not a sound vehicle for such a marked change in the law, because the cumbersome Lemon test would find fault with many foreign policy measures. For example, Congress passed the Lautenberg Amendment, sought by the Hebrew Immigrant Aid Society (HIAS) – one of the plaintiffs in IRAP v. Trump – to protect Soviet Jews. (See Josh Blackman’s discussion here.) This legislation presumed persecution for Russian Jewish asylum-seekers. In other words, individuals in this group did not have to go through the full rigors of the asylum adjudication process. Other applicants for asylum might have viewed the Lautenberg Amendment as exactly the kind of help to religion that the Establishment Clause forbids.

I’d argue that the Lautenberg Amendment, which HIAS now proudly says was expanded to include other religious minorities, was a step in the right direction. In immigration, I believe it’s best to take a good first step and then bring others along. Stopping the first step helps no one. In this sense, the focus on the Establishment Clause in IRAP v. Trump is a cure worse than the disease.

Of course, one can argue that the Lautenberg Amendment was benign, while both the original and revised EOs will at least entail additional delay for meritorious refugee and visa applications. That certainly makes a difference in terms of policy. However, it doesn’t cut any ice under the Establishment Clause, which bars both help and hindrance to religion.

My central concern is with the institutional costs of expanding the Establishment Clause to cover immigration. I’m wary of courts parsing the intent of the Congress that enacted the Lautenberg Amendment. On that front, the Fourth Circuit did not inspire confidence in its decision on Thursday.

To parse language, one should at least provide an exact quote. However, in his lengthy opinion, Judge Gregory merely paraphrased relevant comments, such as Rudy Giuliani’s account that Trump asked him to “[p]ut a commission together… [and] show me the right way to do it legally” (emphasis added). Judge Gregory, at page 51 in his opinion, framed this as Trump instructing Giuliani “to find a way to ban Muslims in a legal way.” But that’s not an accurate paraphrase of  Rudy’s account. Rudy didn’t mention any Muslim ban; indeed in his comments he spoke highly of Saudi Arabia. That’s an odd reference for someone pushing a ban on Muslim immigration.

Similarly, critics of the EOs have interpreted Trump’s signing ceremony comment, “[w]e all know what that means,” as referring to a Muslim ban. However, read in context, Trump’s reference to “that” concerned the threat of foreign terrorism. If a court devotes 100 pages to an Establishment Clause analysis of a speaker’s intent, the court should get the quotes right. If the Fourth Circuit couldn’t manage that simple task, perhaps using the Establishment Clause to stop the revised EO isn’t worth the candle.