J. Reinhardt: "The government forces us to participate in ripping apart a family" 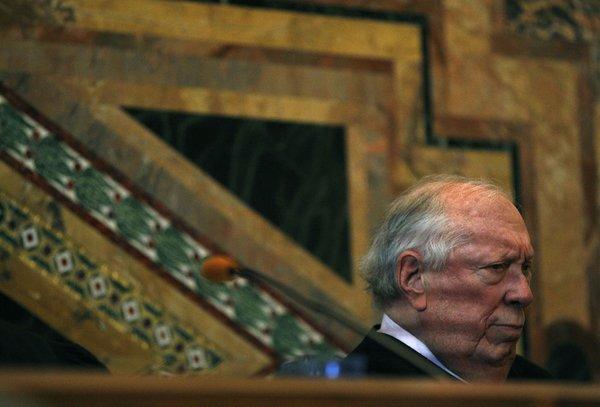 In a short published decision out of the Ninth Circuit, Judge Stephen Reinhardt writes a powerful concurrence in a decision denying a stay of removal, Ortiz v. Sessions, No. 17-16014 (9th Cir. May 30, 2017). The entirety of the concurrence (minus the footnotes) is pasted below, with my emphasis.  Judge Reinhardt explains that the court must deny the request for a stay because of the lack of legal authority upon which to grant it, but more importantly, his concurrence contains a strong critique of this Administration's effective elimination of meaningful discretion from the immigration system and is a solid illustration of what is emerging as a pillar of the federal government's immigration enforcement strategy:  the denial of stays and execution of previously issued removal orders.

"We are compelled to deny Mr. Magana Ortiz’s request for a stay of removal because we do not have the authority to grant it. We are not, however, compelled to find the government’s action in this case fair or just.

The government’s insistence on expelling a good man from the country in which he has lived for the past 28 years deprives his children of their right to be with their father, his wife of her right to be with her husband, and our country of a productive and responsible member of our community. Magana Ortiz, who first entered the United States at 15, is now 43 years old, and during his almost three decades here has raised a family and built a successful life. All of his children, ages 12, 14, and 20, were born in this country and are American citizens, as is his wife.  His eldest daughter currently attends the University of Hawaii, and he is paying for her education.

Since coming to the United States, Magana Ortiz has become a respected businessman in Hawaii and well established in the coffee farming industry. He has worked with the United States Department of Agriculture in researching the pests afflicting Hawaii’s coffee crop, and agreed to let the government use his farm, without charge, to conduct a five-year study. In his time in this country Magana Ortiz has built a house, started his own company, and paid his taxes. Although he apparently has two convictions for driving under the influence, the latest of them occurred fourteen years ago, and he has no history of any other crimes. Indeed, even the government conceded during the immigration proceedings that there was no question as to Magana Ortiz’s good moral character.

After his immigration case concluded with a decision to remove Magana Ortiz because of his 1989 illegal entry into the United States, he filed for a stay of removal in September 2014. That stay was granted, allowing him to remain with his family and pursue available routes to legal status. On November 2, 2016, Magana Ortiz filed for an additional stay of removal. Without any explanation, the government on March 21, 2017 reversed its position, and ordered him to report for removal the next month. A subsequent application for a stay was similarly denied, and on May 10, 2017, Magana Ortiz went to the district court, where he filed an emergency request for a stay of removal for a period of nine months. That request was denied, and on May 17, 2017, he appealed to this court to intervene.

Magana Ortiz now asks us to stay his imminent removal. Because we are without authority to do so, he will be returned to Mexico, after having spent 28 years successfully building a life and family in this country. He will also be subject to a ten-year bar against his return, likely forcing him to spend a decade deprived of his wife, children, and community.

This was not the necessary result. Magana Ortiz is currently attempting to obtain legal status on the basis of his wife’s and children’s citizenship, a process that is well underway. It has been over a year since his wife, Brenda, submitted her application to have Magana Ortiz deemed her immediate relative. This August, his eldest daughter, Victoria, will turn 21, and will also be able to file an application for her father. All Magana Ortiz asked for in requesting a stay was to remain in this country, his home of almost three decades, while pursuing such routes to legal status. It was fully within the government’s power to once more grant his reasonable request. Instead, it has ordered him deported immediately.

In doing so, the government forces us to participate in ripping apart a family. Three United States citizen children will now have to choose between their father and their country. If they leave their homeland with their father, the children would be forced to move to a nation with which they have no connection. All three children were born in the United States; none has ever lived in Mexico or learned Spanish. Moving with their father would uproot their lives, interrupt their educations, and deprive them of the opportunities afforded by growing up in this country. If they remain in the United States, however, the children would not only lose a parent, but might also be deprived of their home, their opportunity for higher education, and their financial support.  Subjecting vulnerable children to a choice between expulsion to a foreign land or losing the care and support of their father is not how this nation should treat its citizens.