From the Bookshelves: Water Tossing Boulders: How a Family of Chinese Immigrants Led the First Fight to Desegregate Schools in the Jim Crow South by Adrienne Berard 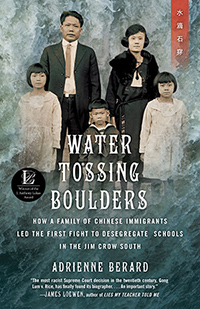 Almost 30 years before Linda Brown and her parents took on the Topeka Board of Education in Brown v. Board of Education, Martha Lum’s parents Jeu Gong and Katherine sued to try to stop Rosedale, Mississippi, from barring their Chinese-American children from the local “white” school. Their case, Gong Lum v. Rice, made it to the U.S. Supreme Court in 1927. But rather than granting them relief, the unanimous U.S. Supreme Court decision led to even stricter school segregation.

For this episode of the Modern Law Library, in honor of Asian Pacific American Heritage Month, the ABA Journal’s Lee Rawles discusses this little-known chapter of history with Adrienne Berard. Berard is the author of Water Tossing Boulders: How a Family of Chinese Immigrants Led the First Fight to Desegregate Schools in the Jim Crow South. Berard discusses the bravery of the family’s decision, and the complicated state of race relations in 1920s Mississippi in which the debate over whether the “colored” category applied to Asian-Americans took place. We also discuss Earl Brewer, a former governor of Mississippi, who took the Lums’ case in a bid to regain his reputation, and how the immigration debates of the early 20th century have ugly echoes in today’s political environment.