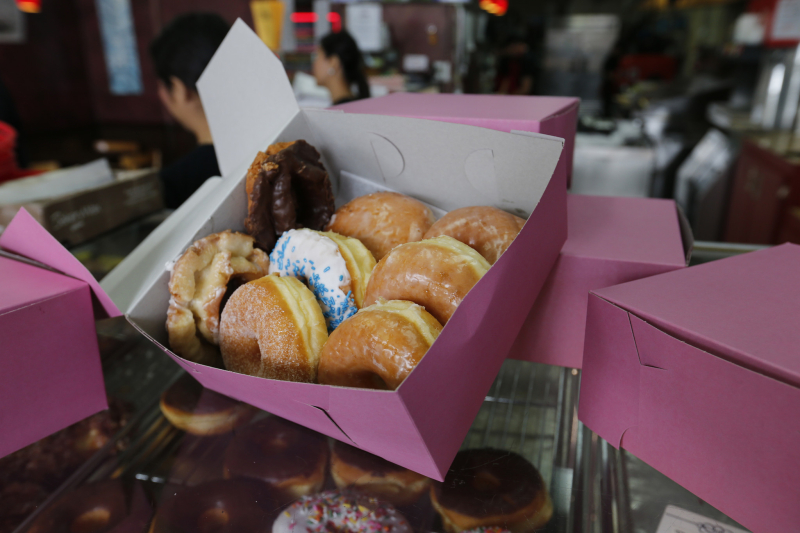 The Los Angeles Times reports on this "sweet" story about everyone's favorite breakfast food:  "Instead of national chains, the Southern California doughnut sector is dominated by mom-and-pop businesses run by immigrants, none more influential than Cambodian Americans."

Landing here as refugees in the mid-1970s to escape the Khmer Rouge, the Southeast Asian community quickly found a lifeline in the doughnut business.

An ambitious Cambodian refugee named Ted Ngoy built a network of doughnut shops and staffed them with his countrymen whose visas he sponsored. Ngoy started in Orange County, in La Habra and expanded to Fullerton, Anaheim and Buena Park. Cambodian doughnut stores spread to Los Angeles County, which long been dominated by the Winchell’s Donuts chain.

Years ago, Bill Hing told me about the presence of Cambodians in the donut business.

Packaging is the only thing that customer sight first before buying any product. You may have noticed different Custom Donut Boxes in the marketing, some come in glittery material, while others are printed and embossed with company’s logo. So, these are all various customization that marketers use to make their packaging attractive and wonderful for the customers.

. The donut confines fill as the best wellspring of headway of your picture name and spread the news of your business to the edges of your locale. Most by far of the colossal names in bread shop business use donut boxes not only to appeal feature of their adorable mouth-watering doughnuts they in like manner expect an imperative part in the progression of their business.

The Donut needs a special packaging to be protected and save from the external effects and these boxes also secure your donuts from the external germs. The modified shapes of donut boxes are purposeful to promote your brand in the marketplace. It is the best way to keep your food fresh and neat. There are many boxes of different sizes in the market. The shapes, styles and the color are different of each brand.

Packaging is great to cover everything.

30ml Bottle Boxes presents brilliant and extraordinary packaging arrangements in spite of the fact that these packaging boxes UK are available for
customers with countless customization alternatives.

BBC Cargo Shipping services in Dubai had started its operations, established by the Experienced Emarati Management who have a great experience in Freights Fields, and in a few Months, it became one of the leading International Freight Forwarding and Shipping Agents in the Middle East and around the World.

Good to see these cambodian guys getting this done. Im from socal, they have some communities here

Packaging is great to cover everything.

Great info. Thank you for sharing this fascinating information together.

Donuts look delicious, seems like they havea good cook, right? I would loveto eat these donuts while I'm playing casino on https://casinojefe.com

I really liked your article.
Thanks for sharing!
https://fastcustomboxes.com/custom-bath-bomb-boxes/

I thank you for giving us such a brilliant piece of space where we can read a very interesting knowledge about how to select a suitable product for your self.

This is a very well-presented post, my compliments. It has a lot of key elements that truly make it work. And I love the outline and wordings. You really have a magnetic power that catches everyone into your blog. Good one, and keep it going. sleeve packaging boxes

VERY INTERESTING ONE .. THANK YOU FOR SHARING YOUR KNOWLEDGE WITH US

For that, you can easily work on improving the variety and making it more diverse. This will have a highly positive and influential effect and bring good results.

Thank you for sharing this blog, I read and found it interesting. I also have a blogging website, please visit for interesting information and share your valuable views.

I read and found it interesting. Excellent post! Nice to see this again.