As readers of this blog no doubt are aware, the Texas anti-sanctuary bill is generating considerable controversy.  But a Texas travel advisory? 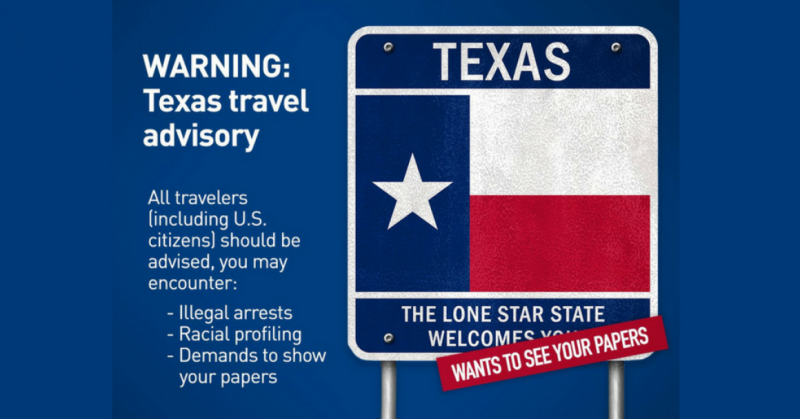 The ACLU of Texas has announced a travel advisory for the Lone Star State.  Here is the announcement:

"The American Civil Liberties Union issued a “travel alert” today informing anyone planning to travel to Texas in the near future to anticipate the possible violation of their constitutional rights when stopped by law enforcement.

The alert comes amid the passing of a Texas law known as SB4. The law gives a green light to police officers in the state to investigate a person’s immigration status during a routine traffic stop, leading to widespread racial profiling, baseless scrutiny, and illegal arrests of citizens and non-citizens alike presumed to be “foreign” based on how they look or sound. The travel alert applies to all travelers to Texas, including U.S. travelers from other states and U.S. citizens. In addition, this alert applies to all encounters with federal, state, county law enforcement including local police and sheriffs.

“The ACLU’s goal is to protect all Texans and all people traveling through Texas — regardless of their immigration status — from illegal harassment by law enforcement,” said Lorella Praeli, ACLU director of immigration policy and campaigns. “Texas is a state with deep Mexican roots and home to immigrants from all walks of life. Many of us fit the racial profile that the police in Texas will use to enforce Trump’s draconian deportation force.”

SB4 requires Texas law enforcement to comply with the federal government’s constitutionally flawed use of detainer requests, which ask local law enforcement to hold people for U.S. Immigration and Customs Enforcement (ICE), even when they lack the legal authority to do so.

“We plan to fight this racist and wrongheaded law in the courts and in the streets. Until we defeat it, everyone traveling in or to Texas needs to be aware of what’s in store for them,” said Terri Burke, executive director of the ACLU of Texas. “The Lone Star State will become a ‘show me your papers’ state, where every interaction with law enforcement can become a citizenship interrogation and potentially an illegal arrest.”"

Well, getting Canadian Immigration is not a big deal anymore if you have certain set of skills. Canadian immigration is a perfect way to get immigration. They are offering it for free because they need a lot of men to boost their economy.

this is not a piece of good news. because there are so many people who are applying for Immigration to Canada and the USA. This is not a very motivational thing to do when you are already pretty much known for being racist towards immigrants.

I prefer Immigration Ways is one of the best Immigration agency in Pakistan.
click below links for more information.
Canada Immigration Consultants

You have performed a great job on this article. It’s very precise and highly qualitative. You have even managed to make it readable and easy to read. You have some real writing talent. Thank you so much.

You have performed a great job on this article. It’s very precise and highly qualitative. You have even managed to make it readable and easy to read. You have some real writing talent. Thank you so much.

Kissing Cockatoo design the best Women's and Men's Clothing that are both stylish and creative, just for you. We also offer Face Masks, Homewares, and many more accessories!

Mixed Life is an apparel brand for the mixed, biracial, and infused population. We offer Women's and Men's Clothing, T-Shirts, Accessories and much more trendy products!

Great Content! Admire your endeavor. Canada is currently one of the best countries for international students globally with a wide range of career opportunities. Must not miss this opportunity.

ThankGod Nations are easing down their travel restrictions which is a great sign for international travellors.