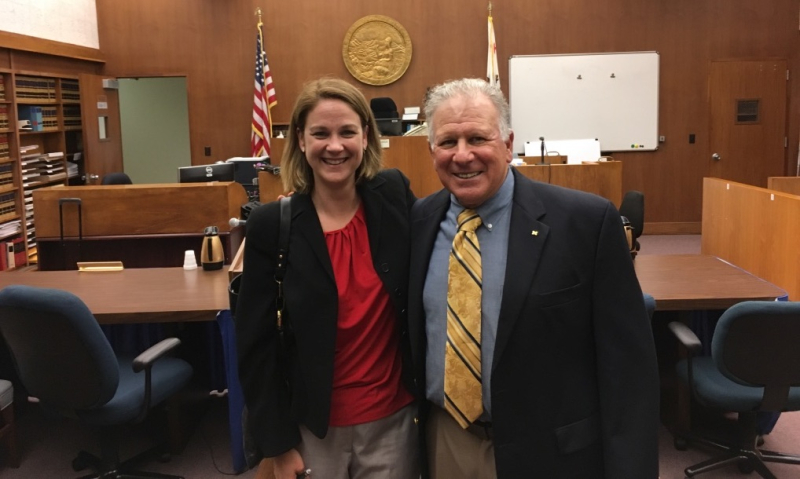 In the old, dilapidated building that is the Superior Court in San Diego, one thing shines through -- the search for justice. Despite the outdated décor, cramped spacing, wooden benches, and books that look like they haven’t moved since the 1950s, this does not inhibit the ability of judges to do their job.

On Friday we met with the honorable Harry Elias. He spoke extensively about California Penal Code §1016.5. This statute requires the Court to advise non-citizens that by entering a plea of guilty to their criminal offense, immigration consequences may follow. There was an old policy in place stating that when negotiating cases, the Court should not take immigration consequences into account. However, now the new policy follows that immigration consequences do in fact come into play in decisions. Although Judge Elias pointed out issues with California law, it seems as if he was a strong advocate for ensuring people, despite legal status, be advised of all their rights.

Judge Elias used to head the Child Abuse Unit in 1985. He then worked for the D.A.’s office for 14 1/2 years, and has now been a judge for the past 27 years. What was most interesting about Judge Elias was his constant desire to be fair to both sides. He acknowledges that because he was a DA he might have some biases, but he always tries to be objective as possible. He stated that when issuing his decision he looks to see if he would be making the same decision if the person were “black, brown, yellow or red.” His honesty and integrity was extremely admirable.

What stuck out to me was his intense goal to be fair to the facts. For example, he only has 90 seconds to make a decision about a motion.. In that time, he does his best to hear both sides and welcomes either attorney to give him more information on the issue. In regards to his decisions being reversed he stated, “I have no qualms about getting reversed so long as I have enough confidence at the time of my decision.” Furthermore, “I learn what I did wrong and don’t make that decision again, even if I disagree with it.” Judge Elias was extremely respectable and truly wants his decisions to be fundamentally fair to both sides.

“When I’m the fact finder, if I’m not satisfied with the lawyers, I ask questions I know I need to ask. I don’t solely rely on the lawyers skills.” This is what the justice system needs. Someone who acknowledges they may have biases and tries their absolute best to seek justice. Even if he does not agree with a higher court reversing this decision, he learns and respects their decision. Although there may be election pressures, he never lets that stand in his way of issuing a decision. In a system where it is very easy to throw the bad guys in jail, he seems to genuinely care about what happens to these people and ultimately wants the best outcome for both sides.

-posted by KitJ on behalf of Siobhan Barry