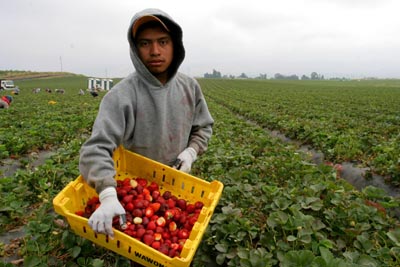 ABC News reports on a basic immigration concern that has been growing in recent weeks and months.

President Donald Trump's focus on immigration enforcement has sent a chill through the nation's agricultural industry, which fears a crackdown will deprive it of much-needed labor to plant, grow and pick the crops that feed the country.

Fruit and vegetable growers, dairy and cattle farmers and owners of plant nurseries and vineyards have begun lobbying politicians to get them to deal with immigration in a way that minimizes the harm to their livelihoods.  Some of the farm leaders are Republicans who voted for Trump and are torn, wanting increased border security but also mercy toward laborers who are not dangerous criminals.

The American Farm Bureau Federation says strict immigration enforcement would raise food prices 5 to 6 percent because of a drop in supply and because of the higher labor costs farmers could face.