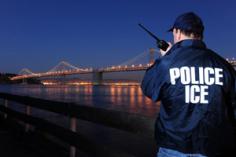 Consistent with other reports, CNN reports that Immigration and Customs Enforcement has been targeting so-called "sanctuary cities" with increased enforcement operations in an effort to pressure those jurisdictions to cooperate with federal immigration agents.  This is what a senior US immigration official with direct knowledge of ongoing ICE actions told CNN.

A sanctuary city is a broad term applied to states, cities and/or counties that have policies in place designed to limit cooperation or involvement in the enforcement of federal immigration operations. More than 100 US jurisdictions -- among them New York, Los Angeles and Chicago -- identify as such.
High-ranking ICE officials have discussed in internal meetings carrying out more raids on those locations, said the source.
KJ