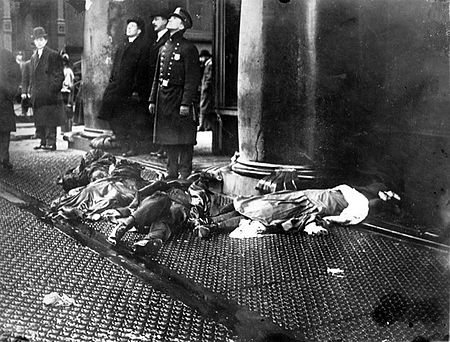 The New York Daily News reports that New Yorkers gathered on Friday to remember Triangle Shirtwaist Factory fire — a tragedy that killed 146 workers, many of them young women.  The March 25, 1911 blaze at a factory near present-day New York University rocked the city — and galvanized the International Ladies Garment Workers Union to push for workplace safety rules still in place today.

The Triangle Shirtwaist Factory fire in New York City on March 25, 1911 was the deadliest industrial disaster in the history of the city, and one of the deadliest in U.S. history. The fire caused the deaths of 146 garment workers – 123 women and 23 men – who died from the fire, smoke inhalation, or falling or jumping to their deaths. Most of the victims were recent Jewish and Italian immigrant women aged 16 to 23; of the victims whose ages are known, the oldest victim was Providenza Panno at 43, and the youngest were 14-year-olds Kate Leone and "Sara" Rosaria Maltese.

The factory was located on the eighth, ninth and tenth floors of the Asch Building, at 23–29 Washington Place in the Greenwich Village neighborhood of Manhattan, now known as the Brown Building and part of New York University.

Because the owners had locked the doors to the stairwells and exits – a then-common practice to prevent workers from taking unauthorized breaks and to reduce theft – many of the workers who could not escape from the burning building simply jumped from the high windows. The fire led to legislation requiring improved factory safety standards and helped spur the growth of the International Ladies' Garment Workers' Union (ILGWU), which fought for better conditions for workers.

The building has been designated a National Historic Landmark and a New York City landmark.