Congress Generates Firestorm of Controversy with Tweet: "We can't restore our civilization with somebody else's babies." 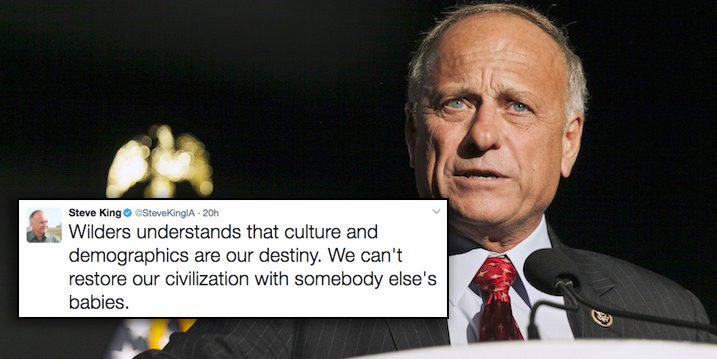 CNN reports that Rep. Steve King (R-Iowa), a strong advocate of immigration enforcement and self-professed advocate for Western civilization, doubled down yesterday on comments he made over the weekend in which he appeared to criticize foreigners and immigrants, drawing complaints of insensitivity on social media and from some of his Capitol Hill colleagues including from within his own party.

King tweeted Sunday, "We can't restore our civilization with somebody else's babies."
Asked by CNN's Chris Cuomo on "New Day" to clarify his comments, King said he "meant exactly what I said."  Senator Bob Menendez (D-NJ) told CNN that King is the leader of "Make America White."  When asked about Rep. King's comments about breeding outside "western civilization," Menendez said the remark was despicable.
Congressman King is no stranger to controversy.  In 2013, King made the now notorious claim that for every child of undocumented immigrants “who’s a valedictorian, there’s another 100 out there who weigh 130 pounds and they’ve got calves the size of cantaloupes because they’re hauling 75 pounds of marijuana across the desert.”  House Speaker John Boehner reprimanded Mr. King, calling his comments “deeply offensive and wrong.”
KJ