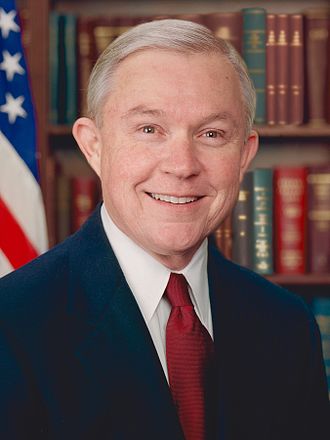 Yesterday, Attorney General Jeff Sessions reiterated President Trump's threat to bar "sanctuary cities" from federal funding.  Section 9 of Trump's January 25 executive order on "Enhancing Public Safety in the Interior of the United States."  As the Los Angeles Times reports, Sessions' statement did not refine previously announced federal anti-sanctuary initiatives or announce any new ones.  Like the executive order, Sessions did not offer a definition of "sanctuary cities" or point to any congressional authorization allowing for their defunding.  He instead simply reiterated the de-funding threats at a time when the Trump administration seeks to move attention away from the failed effort to repeal the Affordable Care Act.

Needless to say, Sessions' threats have been criticized, including by California Senate Pro Tem Kevin de León, who stated that the threat was the equivalent to "blackmail."  Federal defunding of "sanctuary cities" raise non-trivial constitutional questions.

Good afternoon.  The Department of Justice has a duty to enforce our nation’s laws, including our immigration laws.  Those laws require us to promptly remove aliens when they are convicted of certain crimes.

The vast majority of the American people support this common-sense requirement.  According to one recent poll, 80 percent of Americans believe that cities that arrest illegal immigrants for crimes should be required to turn them over to immigration authorities.

Unfortunately, some states and cities have adopted policies designed to frustrate the enforcement of our immigration laws.  This includes refusing to detain known felons under federal detainer requests, or otherwise failing to comply with these laws.  For example, the Department of Homeland Security recently issued a report showing that in a single week, there were more than 200 instances of jurisdictions refusing to honor Immigration and Customs Enforcement (ICE) detainer requests with respect to individuals charged or convicted of a serious crime.  The charges and convictions against these aliens include drug trafficking, hit and run, rape, sex offenses against a child and even murder.

Such policies cannot continue.  They make our nation less safe by putting dangerous criminals back on our streets.

We all remember the tragic case of Kate Steinle, the 32-year-old woman who was shot and killed two years ago in San Francisco as she walked along a pier with her father.  The shooter, Francisco Sanchez, was an illegal immigrant who had already been deported five times and had seven felony convictions.

Just eleven weeks before the shooting, San Francisco had released Sanchez from its custody, even though ICE had filed a detainer requesting that he be kept in custody until immigration authorities could pick him up for removal.  Even worse, Sanchez admitted that the only reason he came to San Francisco was because of its sanctuary policies.

A similar story unfolded just last week, when Ever Valles, an illegal immigrant and Mexican national, was charged with murder and robbery of a man at a light rail station.  Valles was released from a Denver jail in late December, despite the fact that ICE had lodged a detainer for his removal.

The American people are justifiably angry.  They know that when cities and states refuse to help enforce immigration laws, our nation is less safe.  Failure to deport aliens who are convicted for criminal offenses puts whole communities at risk – especially immigrant communities in the very sanctuary jurisdictions that seek to protect the perpetrators.

DUIs, assaults, burglaries, drug crimes, gang crimes, rapes, crimes against children and murders.  Countless Americans would be alive today – and countless loved ones would not be grieving today – if the policies of these sanctuary jurisdictions were ended.

Not only do these policies endanger the lives of every American; just last May, the Department of Justice Inspector General found that these policies also violate federal law.

The President has rightly said that this disregard for the law must end.  In his executive order, he stated that it is the policy of the executive branch to ensure that states and cities comply with all federal laws, including our immigration laws.

Today I am urging all states and local jurisdictions to comply with all federal laws, including 8 U.S.C. Section 1373.  Moreover, the Department of Justice will require jurisdictions seeking or applying for Department grants to certify compliance with Section 1373 as a condition for receiving these awards.

This policy is entirely consistent with the Department of Justice’s Office of Justice Programs (OJP) guidance issued last July under the previous administration.  This guidance requires state and local jurisdictions to comply and certify compliance with Section 1373 in order to be eligible for OJP grants.  It also made clear that failure to remedy violations could result in withholding of grants, termination of grants, and disbarment or ineligibility for future grants.

The Department of Justice will also take all lawful steps to claw-back any funds awarded to a jurisdiction that willfully violates Section 1373.

I urge our nation’s states and cities to consider carefully the harm they are doing to their citizens by refusing to enforce our immigration laws, and to re-think these policies.  Such policies make their cities and states less safe, and put them at risk of losing valuable federal dollars.

The American people want and deserve a lawful immigration system that keeps us safe and serves our national interest.  This expectation is reasonable, and our government has a duty to meet it. And we will meet it.