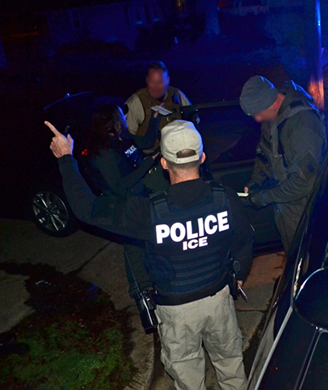 As previously reported on the ImmigrationProf blog, the Trump immigration dragnet has begun.  The January 25 Executive Order on interior enforcement of the immigration laws offered the groundwork for the latest deportation campaign.  Last week, more than 600 noncitizens were arrested. Sueng Min Kim and Ted Hesson on Politico report on the arrests of hundreds of immigrants last week that marked the first large-scale raid under the Trump administration.  Their view:  "the crackdown was, by all indications, just the start of much more to come."

The expansive executive order signed last month by President Donald Trump allows a significantly broader population of immigrants to be picked up for deportation. And Trump has signaled he has every intention of using that authority to carry out his campaign pledge to deport millions of foreigners from the United States.  Immigration advocates say the stepped-up enforcement amounts to a new deportation dragnet that’s ensnaring otherwise law-abiding immigrants.

Secretary of Department of Homeland Security John Kelly on February 13 issued the following statement on the recent ICE enforcement actions:

"Last week, U.S. Immigration and Customs Enforcement (ICE) launched a series of targeted enforcement operations across the country. These operations targeted public safety threats, such as convicted criminal aliens and gang members, as well as individuals who have violated our nation’s immigration laws, including those who illegally re-entered the country after being removed and immigration fugitives ordered removed by federal immigration judges.

ICE officers in the Los Angeles, Chicago, Atlanta, San Antonio and New York City areas of responsibility arrested more than 680 individuals who pose a threat to public safety, border security or the integrity of our nation’s immigration system. Of those arrested, approximately 75 percent were criminal aliens, convicted of crimes including, but not limited to, homicide, aggravated sexual abuse, sexual assault of a minor, lewd and lascivious acts with a child, indecent liberties with a minor, drug trafficking, battery, assault, DUI and weapons charges.

President Trump has been clear in affirming the critical mission of DHS in protecting the nation and directed our Department to focus on removing illegal aliens who have violated our immigration laws, with a specific focus on those who pose a threat to public safety, have been charged with criminal offenses, have committed immigration violations or have been deported and re-entered the country illegally.

I commend the heroic efforts of the dedicated officers of ICE’s Office of Enforcement and Removal Operations and those who provided assistance from ICE Homeland Security Investigations, the U.S. Marshals Service, as well as cooperating state and local law enforcement agencies. These professionals put their lives on the line to protect our communities and country. There is no greater calling than to serve and protect our nation – a mission that the men and women of ICE perform with professionalism and courage every single day."