The Centennial of the Immigration Act of 1917: Historical Foundations and Modern Incarnations 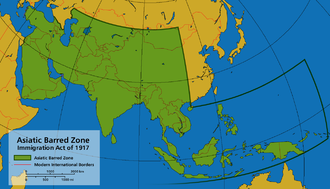 On February 5 1917, 100 years ago to the day, Congress passed the Immigration Act of 1917, which imposed the literacy test on all incoming immigrants and expanded the Chinese exclusion laws to exclude all noncitizens from the "Asiatic Barred Zone."  The 1917 law was a precursor to the Immigration Act of 1924, which created the discriminatory national origins quotas system.  Congress passed the law with an overwhelming majority, overriding President Woodrow Wilson's veto.

Groups such as  the Immigration Restriction League had supported literacy as a prerequisite for immigration for many years. In 1895, Henry Cabot Lodge introduced a bill in the U.S. Senate to impose a literacy test, which would have required prospective immigrants to read five lines from the Constitution. Congress passed the bill but President Grover Cleveland vetoed it. A literacy test was later passed by Congress and vetoed by President Woodrow Wilson.

Anxiety over the fragmentation of American cultural identity, anti-immigrant, and anti-Asian sentiment, led to the Immigration Act of 1917.

Almost immediately after its passage, the Immigration Act of 1917 was challenged by Southwestern businesses. US entry into World War I, a few months after the law's passage, prompted a waiver of the Act's provisions on Mexican agricultural workers. It was soon extended to include Mexicans working in the mining and railroad industries.