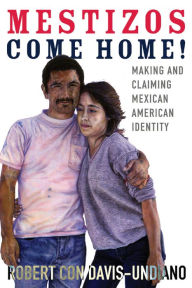 Uruguayan writer Eduardo Galeano has described U.S. and Latin American culture as continually hobbled by amnesia—unable, or unwilling, to remember the influence of mestizos and indigenous populations. In Mestizos Come Home! author Robert Con Davis-Undiano documents the great awakening of Mexican American and Latino culture since the 1960s that has challenged this omission in collective memory. He maps a new awareness of the United States as intrinsically connected to the broader context of the Americas. At once native and new to the American Southwest, Mexican Americans have “come home” in a profound sense: they have reasserted their right to claim that land and U.S. culture as their own.

Mestizos Come Home! explores key areas of change that Mexican Americans have brought to the United States. These areas include the recognition of mestizo identity, especially its historical development across the nineteenth and twentieth centuries; the re-emergence of indigenous relationships to land; and the promotion of Mesoamerican conceptions of the human body. Clarifying and bridging critical gaps in cultural history, Davis-Undiano considers important artifacts from the past and present, connecting the casta (caste) paintings of eighteenth-century Mexico to modern-day artists including John Valadez, Alma López, and Luis A. Jiménez Jr. He also examines such community celebrations as Day of the Dead, Cinco de Mayo, and lowrider car culture as examples of mestizo influence on mainstream American culture. Woven throughout is the search for meaning and understanding of mestizo identity.

A large-scale landmark account of Mexican American culture, Mestizos Come Home! shows that mestizos are essential to U.S. national culture. As an argument for social justice and a renewal of America’s democratic ideals, this book marks a historical cultural homecoming.