Asylum Seekers Continue To Flee US Into Canada

Twenty-two asylum-seekers crossed from the United States into Manitoba during the first weekend of February. Another 21 were intercepted this past weekend.

Desperate individuals, including families, are braving below-zero temps to walk their way across the northern border and into Canada. Some 270 individuals have crossed the border in the last 10 months.

Farhan Ahmed, one of the early-February border crossers, came to the United States from Somalia by way of Brazil, Venezuela, Colombia, Panama, Costa Rica, Nicaragua, Honduras, Guatemala and Mexico. His U.S. asylum application was denied in 2015. He planned to file a second claim but decided there was "no hope" after Trump's executive order barring Somalis from entering the country. He decided to try for a new life in Canada.

A Grand Forks taxi driver who spoke to the CBC, said he picks up riders at the Grand Forks bus depot "all the time" and, for $200, he drives them to the Canadian border. According to Border Patrol officer Eric Kuhn,

the most popular route is a decommissioned border crossing at Noyes, Minn., and Emerson, Man., where people can use a state highway to drive right up to the barricade between the two countries, get out of the vehicle and walk over. 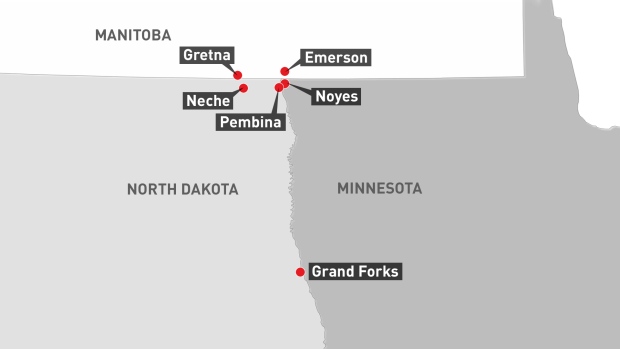 The danger at this time of year, of course, is the cold. One man who crossed on Christmas Eve lost his fingers to cold.

As long as people do not feel safe in the United States, this northern migration will continue, whatever the dangers.