Sarah Lopez is a professor in the University of Texas at Austin School of Architecture. Her work focuses on architectural history within the context of migration.

Lopez and her UT students participated in a nationwide project of the Humanities Action Lab called States of Incarceration. For their part of this project, they:

mapped the locations of detention centers throughout the state and used Google Earth to create silhouettes of each building’s footprint. The researchers even gained hard-won access to one county-run detention center and built a 3-D model from sketches. Their work marks an important step forward in understanding the physical reality of a clandestine and growing carceral system that prefers to exist just out of reach of the American imagination.

Her class contribution to the exhibition is titled Spatial Stories of Migration and Detention.

Check out this drawing of the La Salle Detention Center by Katie Slusher: 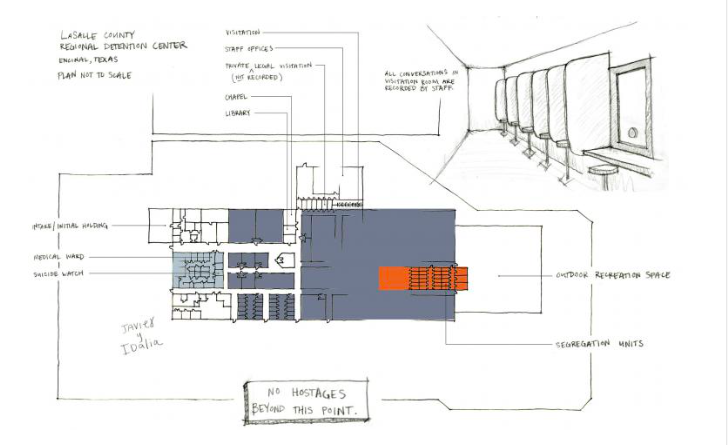 Her drawing is accompanying by these notes:

This layout is drafted from quick sketches and notations created during a tour of La Salle detention center. From an architectural point of view, the detainee living quarters, medical ward, segregation units, and outdoor space were particularly arresting. Aside from outdoor recreation time and voluntary work shifts (for which detainees earn 1 dollar per day), the remainder of a detainee’s average day is spent in a group cell. People with gang affiliations and/or individuals with disabilities are typically placed in smaller capacity or single occupancy rooms. The group cell has exposed bathrooms. Up to 48 men witness each-others’ every move throughout the day. The medical facilities within the detention center contain quarantine cells and a suicide watch room. The suicide watch room is particularly depressing, simply because such a room is necessary. Although used to detain migrants, La Salle has segregation units otherwise known as solitary confinement. Outdoor time for detainees in solitary is restricted to one of the three roof-less rooms extending off the segregation unit cellblock. The segregation unit is equal in size and quality of construction to the suicide watch room, and it is not unlikely that a person may be moved from one to the other.

For all detainees, time spent outside is limited to the federally mandated minimum of one hour per day. Massive barbed wire walls enclose the otherwise barren space.

An excellent project, and a great teaching resource for those of us who are geographically removed from immigration detention facilities.