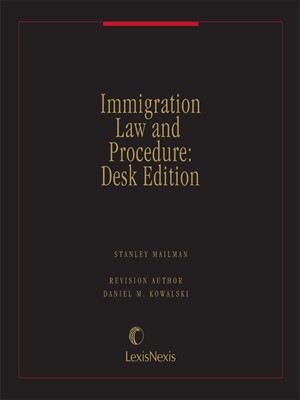 Immigration Law guru Stanley Mailman  86, died peacefully at home in Manhattan on December 3. Stanley received a BA and JD from Cornell University, and practiced immigration law for over five decades. He is the author of Immigration Law and Procedure.

Here is an obit written by Stephen Yale-Loehr:

Stanley Mailman, a prominent immigration lawyer and former partner at Satterlee, Stephens, Burke & Burke, passed away in his home on December 3 surrounded by his family. He was 86.

Stanley received both his B.A. and J.D. from Cornell University and his LL.M. in international law from New York University. He was a past president of the American Immigration Lawyers Association (AILA) and of the Consular Law Society, and served on the boards of the Lawyers Committee for Human Rights (now Human Rights First), the American Foreign Law Association, and the International Rescue Committee. He received numerous AILA awards, including the Edith Lowenstein Award for excellence in immigration law and the Elmer Fried Award for scholarship.

Stanley was a coauthor of Immigration Law and Procedure, the leading 21-volume immigration law treatise, for 25 years. He wrote a regular immigration law column for the New York Law Journal for 30 years.

Stanley was born in New York City in 1930. His parents had immigrated to the United States at the end of the Great War from what was then Russia. His dad Nathan was a skilled furrier. His mother Helen was an enterprising milliner and business owner.

Stanley began practicing immigration law under the tutelage of Elmer Fried, one of the early experts in the emerging field. Stanley would go on to become a pioneer and scholar of immigration and asylum law.

Stanley was a strong advocate for the civil rights of immigrants. Three examples follow.

In 1980, during the Haitian refugee crisis, Stanley joined a team of lawyers to successfully advocate for imprisoned refugees being denied proper representation and fair hearings. In Bertrand v. Sava, he and others successfully argued that federal courts may exercise habeas corpus jurisdiction to review allegations that an immigration official abused his discretion in denying parole to detained Haitians.

In another case, Tibke v. INS, Stanley successfully argued that the immigration agency interpreted the adjustment of status provision in the Immigration and Nationality Act too narrowly.

Stanley was a witty and active writer and a stickler for proper English, written in clear and simple language. An early proponent of gender-neutral language, he often used the feminine third person “she” in professional writing.

Personally, Stanley was known for his unflappable ethics, and believed in the truth in all aspects of personal and professional life. He held himself to the highest standards, yet was non-judgmental in his relationships.

Stanley met his wife Mary Ann in 1963. They were married 4 months later by a justice of the court in Lower Manhattan. They lived on the Upper West Side for 47 years, where they raised their two sons.

Stanley was a frequent jogger on the Central Park reservoir, an accomplished golfer, and a lover of apples. He was a dedicated family man, proud grandfather, and loving uncle to 14 nieces and nephews.

He is survived by his wife of 53 years, Mary Ann, sons Joshua and Alex, daughter-in-law Danielle and granddaughter, Lydia, and his brother Philip.

Funeral services will be held at 11 am on Tuesday December 6 at Plaza Jewish Community Chapel. In lieu of flowers the family requests that donations be made to the immigration section of Sanctuary for Families (https://www.sanctuaryforfamilies.org) or to Cornell University Law School (http://www.lawschool.cornell.edu) for its immigration and asylum programs.

Thank you Steve for a wonderful tribute and memorial to Stanley Mailman. He was a great person and a great lawyer who will be missed..

Stanley was a true gentleman, scholar, teacher, and leader. I always enjoyed dealing with him even when we were on different sides of an issue. Thanks, Steve, for a great tribute!