Deported with No Possessions: The Mishandling of Migrants' Personal Belongings by CBP and ICE 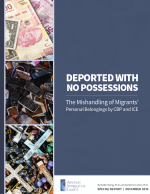 Today, the American Immigration Council releases Deported with No Possessions: The Mishandling of Migrants' Personal Belongings by CBP and ICE.  Each year, tens of thousands of individuals are deported from the United States to Mexico without their personal belongings—including their identifications, money, cell phones, and other possessions. Both U.S. Customs and Border Protection and Immigration and Customs Enforcement have a serious and longstanding problem with handling the personal belongings of detained migrants in their custody. While efforts have been made to try to fix this problem through policy changes, new data reveals that the problem persists. The report shows that detainees from Mexico are still just as likely to have their property retained and not returned as they were before government agencies implemented new policies beginning in October of 2015.