The Trump Effect on Enrollment of International Students in the US Data from the Institute of International Education

The revenue that these students bring to campuses nationwide is significant. And their varied backgrounds and experiences greatly enrich our classrooms.

Now, it appears, fears about president-elect Donald Trump's immigration reforms may lead some international students to pursue their education outside the United States.

Students are afraid about Trump's ideas regarding Muslim registration. This alone might dramatically affect enrollment of international students come 2017-2018. After all, the country presently sending the third highest number of students to the U.S. is Saudi Arabia, a predominantly Muslim country.

Students are also concerned about potential limits on their ability to work in the United States after graduation. If NAFTA is abandoned or renegotiated, for example, what will that mean for Canadian and Mexican graduates hoping to secure a TN visa? What will happen if Trump spearheads efforts to restrict OPT? What if H1B changes are pursued with Congress?

Universities may be inclined to adopt a “wait and see” attitude about what changes actually happen and in what order. Yet such an approach is misguided. The mere possibility of these changes is going to affect enrollment.

Remember what happened to law school enrollment when the NYT questioned its value in 2011? Here, let's let Paul Caron remind you: 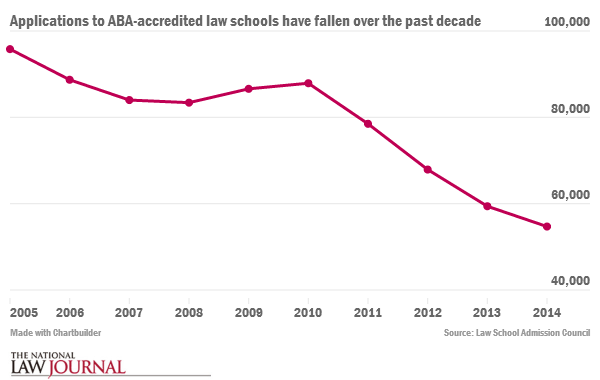 I'm sure we've all sat in a few meetings looking at similar charts over the years. Law schools around the country are still reeling.

So, the mere possibility of restrictive immigration policies will undoubtedly affect international student enrollment. And the shortfalls that will occur as a result of reduced enrollment of international students will have a significant financial impact on universities around the country. If your institution isn't thinking about this yet, they need to.

Now is the time for universities to engage with their elected federal representatives to make them understand the economic impact that immigration changes will have on higher education. It's also time to start getting serious about strategic planning for inevitable revenue shortfalls.