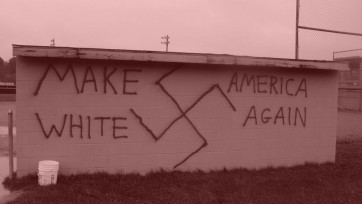 As President-elect Donald Trump prepares to deport millions, an investigation of immigrant detention centers in the South has found that detainees are routinely denied due process and frequently endure inhumane conditions in isolated facilities that have little oversight from the federal government.

The report, Shadow Prisons: Immigrant Detention in the South, details a seven-month investigation by the Southern Poverty Law Center (SPLC), the National Immigration Project of the National Lawyers Guild (NIPNLG) and the Adelante Alabama Worker Center.

“President-elect Trump’s deportation plan could require a massive expansion of an already broken system and the creation of a prison infrastructure that will cost billions and only exacerbate our country’s mass incarceration problem,” said Lisa Graybill, SPLC deputy legal director.

The study is based in part on interviews by legal and human rights advocates with more than 300 immigrants held in six detention centers in Alabama, Florida, Georgia and Louisiana.

“This report shows that immigrant detention centers in the South fail to ensure the rights and safety of people in their custody,” said Eunice Cho, SPLC staff attorney and author of the report. “Flooding the immigration detention system with hundreds of thousands of additional people will only lead to a grave human rights crisis.”

In addition to identifying inadequate medical care and widespread abuses, the study found that many immigrants languish in detention centers for months or sometimes years – typically without legal counsel and in violation of their rights – as they await hearings or deportation.

The 300 detainees interviewed represent more than 5 percent of the average daily population at the six detention centers. Three of the facilities are operated by private, for-profit prison companies and three are operated by county sheriffs under contract with Immigration and Customs Enforcement (ICE).

The report’s findings include the following:

Detained immigrants in the South experience some of the weakest due process protections in the nation, prolonging their detention. At the Stewart Immigration Court in Georgia, which is part of the Stewart Detention Center, detainees reported that judges demonstrated bias against detainees without counsel.

Detained immigrants described being subjected to physical abuse, retaliation and excessive use of segregation and lockdown by detention center staff and ICE officers. At the Etowah County Detention Center in Alabama, detainees reported that ICE officials had used force on detainees who refused to sign travel documents.

“The abuses that are taking place in Southern detention facilities may be vastly increased under the Trump administration,” said Jessica Vosburgh, director of Adelante Alabama Worker Center. “But immigrant communities in the South will also strengthen our efforts to fight back against hateful practices.”

Recent actions by the Department of Homeland Security (DHS) suggest that it might rely on private companies to expand the system – even though studies show privatized prisons are generally less safe, less effective and no less costly than government-operated prisons.

Earlier in 2016, the Department of Justice (DOJ) announced that it would no longer contract with private corporations to operate federal prisons, a decision spurred by the declining prison population and the failure of private prisons to provide safe and secure facilities.

In the wake of the DOJ decision, the DHS announced it would also re-examine its use of privatized immigration facilities. But the agency quickly renewed or finalized contracts for thousands of additional beds. The agency has also expanded the number of individuals it plans to detain every night by 10,000 people – pushing the total number of detainees to an estimated 45,000 people.

What’s more, the agency’s new contracts include a facility – the Cibola County Correctional Center in Milan, New Mexico – that lost its contract with the DOJ after reports of abuse and medical neglect. The DHS’s actions suggest that the private prisons no longer used by the DOJ, including some of the worst in the country, could simply become immigration detention centers.