The U.S. Supreme Court has set for oral argument Lynch v. Morales-Santana for November 9.  As previously reported on ImmigrationProf, the question presented is whether a federal law that, for purposes of U.S. citizenship, treats a child born abroad whose father is a U.S. citizen differently from a child born abroad whose mother is a U.S. citizen violates the Constitution.  It is one of two potentially major immigration cases pending before the Court in the 2016 Term.  The Court could address the vitality of the venerable plenary power doctrine -- or not.

The Solicitor General's brief, pp. 13-18, contend that the courts should generally defer to the judgment of Congress on issues of immigration and naturalization.  In so doing, the brief offers rare citations to plenary power landmarks,  The Chinese Exclusion Case (p. 15) and Mezei (p. 15), as well as the more standard cite to Mathews v. Diaz (1976) (p. 16). 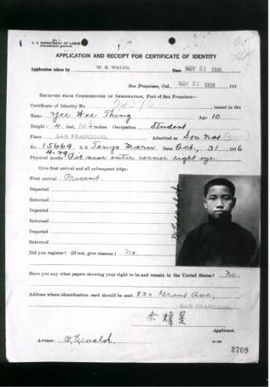 Certificate of identity issued to Yee Wee Thing certifying that he is the son of a US citizen, issued Nov. 21, 1916. Under the terms of the Chinese Exclusion Act, this was necessary for his immigration from China to the United States 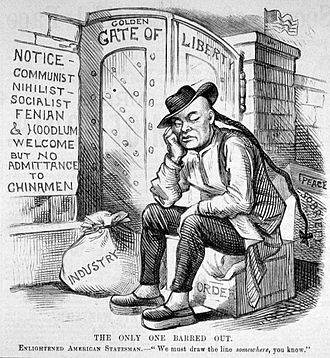 A political cartoon from 1882, showing a Chinese man being barred entry to the "Golden Gate of Liberty." The caption reads, "We must draw the line somewhere, you know."