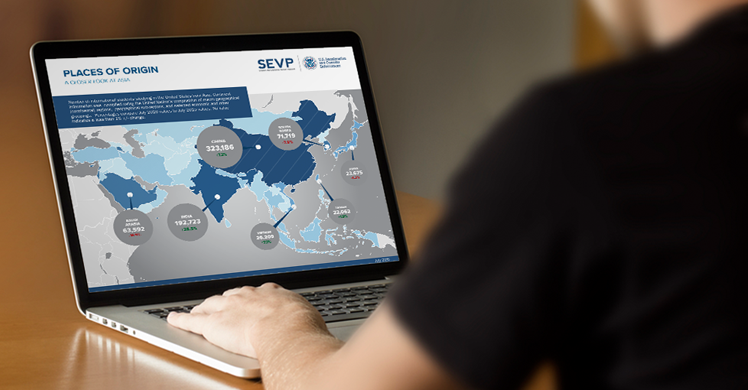 There are 1.11 million international students with F (academic) or M (vocational) status studying in the United States according to the latest "SEVIS by the Numbers," a quarterly report on international student trends prepared by the Student and Exchange Visitor Program (SEVP), part of U.S. Immigration and Customs Enforcement’s (ICE) Homeland Security Investigations (HSI).

The report, released Tuesday by SEVP, highlights July 2016 data from the Student and Exchange Visitor Information System (SEVIS), a web-based system that includes information about international students, exchange visitors and their dependents while they are in the United States.

Arkansas and New Hampshire saw the highest percentages in international student growth, at 20 and 19 percent respectively, compared to July 2015.

SEVP monitors approximately one million international students pursuing academic or vocational studies (F and M visa holders) in the United States and their dependents. It also certifies the schools and programs that enroll these students. The U.S. Department of State monitors exchange visitors (J visa holders) and their dependents, and oversees exchange visitor programs.

Both use SEVIS to protect national security by ensuring that students, visitors and schools comply with U.S. laws. SEVP also collects and shares SEVIS information with government partners, including U.S. Customs and Border Protection and U.S. Citizenship and Immigration Services, so only legitimate international students and exchange visitors gain entry into the United States.

Learn more about SEVP at www.ICE.gov/SEVP.

I found the following most interesting:

44 percent of European students were enrolled at schools in three states:

Arkansas and New Hampshire saw the highest percentages in international student growth, at 20 and 19 percent respectively, compared to July 2015.

While it's obvious that ICE's international student ban was a politicized measure. Indeed, not so many military students from China are coming to the US to study. Still, the ties to the Chinese military education was a marker for ICE to ban them.

i want go to Germany for study information technology field

thanks you your site very good

Good post, very well written. If you need help writing an equally good post, article, or research paper, we will help you paperwritingservices the result will surprise you!