Nigel Duara of the Los Angeles Times reports that Arizona has announced an end to its practice of requiring police officers to demand the papers of people suspected of being in the country unlawfully — a move that pulls the last set of teeth from what was once the nation’s most controversial state immigration enforcement law.

The announcement yesterday came as part of a settlement with the National Immigration Law Center and other immigrants’ rights groups that sued six years ago just after passage of the Arizona's SB 1070.  The state of Arizona will also pay $1.4 million in attorneys’ fees to the plaintiffs. Arizona Atty. Gen. Mark Brnovich issued an informal opinion as part of the settlement that instructs police officers to ignore Section 2(B) the provision in the law that requires them to investigate a “reasonable suspicion” that a person is in the country illegally — an element of the law that immigrants’ rights groups warned would lead to racial profiling.  Section 2(B) was the only one of four core provisions of S.B. 1070 that the Supreme Court did not invalidate in United States v. Arizona.

Here is the National Immigration Law Center press release on the settlement.  The ACLU of Arizona and MALDEF were also among the attorneys for the plaintiffs.

At least one prominent local activist expressed concerns about the settlement and reminded of the need for continues vigilance. 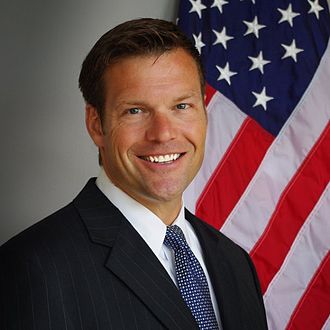 No comment at this point from Kris Kobach, Kansas Secretary of State and anti-immigrant activist (or "nativist son," according to Mother Jones) who was one of the drafters of S.B. 1070.  Kobach has drafted a number of immigration enforcement laws, pulling in huge fees while the laws have floundered in the courts.  Kobach has recently been working at restricting voting privileges and claims to be advising Donald Trump on immigration issues.