From the Bookshelves: Strangers in Our Midst: The Political Philosophy of Immigration by David Miller 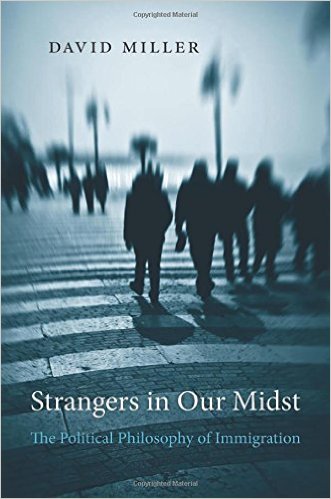 Strangers in Our Midst: The Political Philosophy of Immigration by David Miller

It is not unusual for people in countries with limited job opportunities and economic resources to want to seek a better life in different lands. This is especially so for those who come from countries where they are treated poorly, discriminated against, or worse. But moving from one country to another in large numbers creates serious problems for receiving countries as well as those sending them.

How should Western democracies respond to the many millions of people who want to settle in their societies? Economists and human rights advocates tend to downplay the considerable cultural and demographic impact of immigration on host societies. Seeking to balance the rights of immigrants with the legitimate concerns of citizens, Strangers in Our Midst brings a bracing dose of realism to this debate. David Miller defends the right of democratic states to control their borders and decide upon the future size, shape, and cultural make-up of their populations.

Reframing immigration as a question of political philosophy, he asks how democracy within a state can be reconciled with the rights of those outside its borders. A just immigration policy must distinguish refugees from economic migrants and determine the rights that immigrants in both categories acquire, once admitted. But being welcomed into a country as a prospective citizen does more than confer benefits: it imposes responsibilities. In Miller’s view, immigrants share with the state an obligation to integrate into their adopted societies, even if it means shedding some cultural baggage from their former home.

Matt Lister concludes his review of Strangers in Our Midst with the following:

Miller has written an important book, one that provides a clear statement of an important prospective. It provides perhaps the best systematic argument for states having the right to set their own immigration policies. Furthermore, by insisting on taking the opinions of the public seriously, Miller leads us to reconsider and reevaluate many views widely held by both theorists of immigration and activists. Yet, the solutions to the problems discussed in the book aren’t clear, and I have tried to give some reason to think that Miller’s preferred solutions aren’t fully plausible. It’s possible that there is no fully satisfactory solution to some of these problems, and we will be left in the end with a degree of ad-hoc balancing. Those seeking to do the weighing of different values, however, would be well served to read Miller’s careful and thoughtful book.