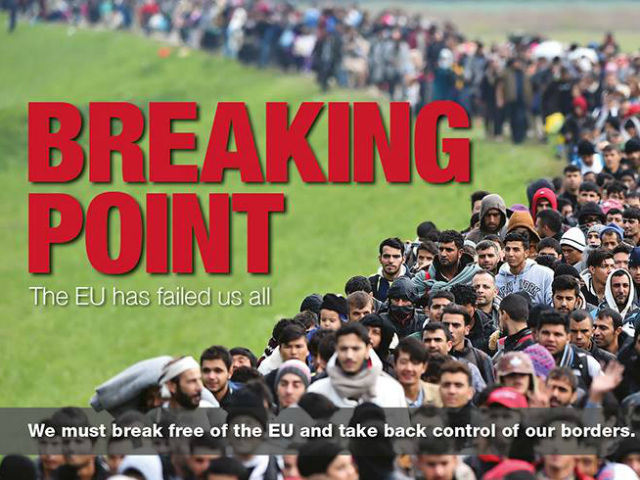 The Leave campaign platform emphasized the idea that the UK could better control immigration if it left the EU. And that immigration was overstretching the country's social services. As the Reality Check team notes:

Responding to the latest Office for National Statistics (ONS) figures, which showed that overall net migration stands at 333,000, MEP Nigel Farage said: "Mass immigration is still hopelessly out of control and set to get worse if we remain inside the EU."

She said voting to remain meant there would be "no control" over migration from the EU, "no matter how great the pressure on schools, hospitals and housing becomes or how much wages in our poorest communities are pushed down".

Similarly, leading pro-Leave campaigner and Tory leader front runner Boris Johnson said that the only solution to the scale of immigration which the UK was facing, was to leave the EU.

He claimed a vote to stay in the union would mean people "kissing goodbye permanently to control of immigration".

On the 20 May, Vote Leave produced a document which it claimed outlined the pressure that migration from the European Union would put on the NHS - a 28% to 57% increase in demand for accident and emergency services.

That last bit, the BBC Reality Check Team disputes, noting: "As we discovered, an increasing population would put additional demand on A&E but the extent of that increase had not been demonstrated."

But the Leave politicos now appear to be backtracking. Some Leave campaigners are positing that "the UK's decision to leave the EU would not guarantee a significant decrease in immigration levels." And, as I noted on Monday, Leave politician Boris Johnson now claims that the exit vote wasn't about immigration at all.

Johnson is not the only one to switch the message.

[S]peaking to the BBC's Newsnight programme on Saturday, MEP Daniel Hannan insisted the public had not been misled over how much control the country would have over immigration post-Brexit.

In a heated exchange with Evan Davis, he said: "We never said there was going to be some radical decline ... we want a measure of control".

"Frankly, if people watching think that they have voted and there is now going to be zero immigration from the EU, they are going to be disappointed."