From the Bookshelves: The Great Departure: Mass Migration from Eastern Europe and the Making of the Free World by Tara Zahra 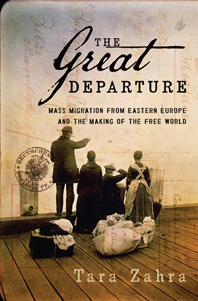 The Great Departure: Mass Migration from Eastern Europe and the Making of the Free World by Tara Zahra

Between 1846 and 1940, more than 50 million Europeans moved to the Americas, irrevocably changing both their new homes and the ones they left behind. In this groundbreaking study, Tara Zahra explores the deeper story of this astonishing movement of people—one of the largest in human history.

The great exodus out of Eastern Europe hollowed out villages with dizzying speed. As villages emptied and the fear of depopulation ran rampant, anxiety over “American fever” prevailed, leading to the scapegoating of Jewish emigration agents. Yet others saw vast opportunity: to seed colonies of migrants like the Polish community in Argentina, to gain economic advantage from an inflow of foreign currency, or to reshape their communities in a new land. In the United States, their migration fostered the notion of the “land of the free.” Globally, the policies that gave shape to this migration provided the precedent for future events such as the Holocaust, the closing of the Iron Curtain, and the tragedies of ethnic cleansing.

A sweeping history of the most consequential social phenomenon of the twentieth century, The Great Departure gives poignant attention to the individuals whose lives were transformed by these decades of mass departure, and a keen historical perspective on their continuing legacy.

For a book review and interview with the author in National Geographic, click here.