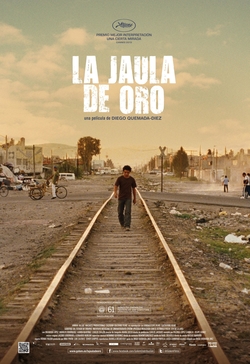 One of the films to be shown in the Law and Film Series at the 2017 Annual Meeting of the Association of American Law Schools in San Francisco focuses on immigration.

La jaula de oro ("The Cage of Gold"/ “The Golden Dream” (2013) is a Mexican feature film directed by Diego Quemada-Díez. The film features an ensemble cast of Central American younger undocumented immigrants fleeing Guatemala, and who make their way to the United States in a harrowing fashion by foot and by “la bestia,” the train that snakes its way to the border, with immigrants clinging to it at great peril. This is a timely film, made with great skill and narrative power. It has begun to be shown on college campuses, and it will be discussed by immigration law professor Michael A. Olivas (Houston) and Jaula producer Luis Salinas, an award-winning filmmaker.