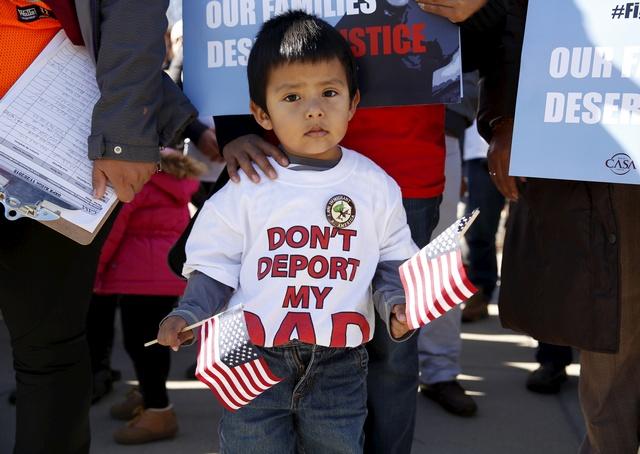 A proposed resolution to be introduced on April 26, 2016, by the Congressional Progressive Caucus, symbolically recognizes some of the harm caused by these laws and proposes limited reform.

“The US appears to be coming to grips with the harm caused by its 90s-era crime laws,” said Alison Parker, co-director of the US program at Human Rights Watch. “These 90s-era immigration laws also deserve serious scrutiny and reconsideration.”
President Bill Clinton signed the Antiterrorism and Effective Death Penalty Act of 1996, known as AEDPA, on April 24, 1996. The legislation, passed in the aftermath of the 1995 Oklahoma City bombing, greatly expanded the grounds for detaining and deporting immigrants, including long-term legal residents. It was the first US law to authorize certain now-widely-used fast-track deportation procedures.

The Illegal Immigration Reform and Immigrant Responsibility Act (IIRIRA), signed in September 1996, made further sweeping changes to immigration laws. It eliminated key defenses against deportation and subjected many more immigrants, including legal permanent residents, to detention and deportation. IIRIRA defined a greatly expanded range of criminal convictions – including relatively minor, nonviolent ones – for which legal permanent residents could be automatically deported. IIRIRA also made it much more difficult for people fleeing persecution to apply for asylum.

Over the last two decades, Human Rights Watch has documented how these laws rip apart the families of even long-term legal residents via the broad swath of criminal convictions considered triggers for automatic deportation or detention.
Antonio C. (pseudonym), a legal permanent resident from Ecuador, is just one current example. US authorities are detaining him for deportation on the basis of a 2005 drug conviction. He was brought to the US when he was a year old and has seven US citizen children, including a 3-year-old son with autism.

“I grew up in a neighborhood in Queens that was basically drugs and fighting,” he told Human Rights Watch. “And I messed up. But I paid for what I did and I learned my lesson. Now they are trying to take me away from my kids.”
The laws have also helped perpetuate a system of unnecessarily widespread immigration detention. They include provisions authorizing mandatory, sometimes prolonged detention during deportation proceedings for thousands of immigrants who have already served their criminal sentences for drugs or other crimes. The mandatory detention provisions also require detention of non-citizens in expedited deportation procedures while they apply for asylum or humanitarian protection.
Oscar M. (pseudonym) was “mandatorily” detained for 11 months in 2014, after entering the US to seek protection from his family and the Honduran police, who had threatened his life because he is gay.

“Being detained was unbearable for me,” he said. “I didn’t feel safe. I felt harassed and I wanted to give up, which would have been suicide.” In December 2014, he was granted the right to remain in the US and protection from deportation certifying that he met and exceeded the standards for refugee protection under US law.
Human Rights Watch has also found that the fast-track border deportations authorized by these laws deny many asylum seekers a meaningful opportunity to make their claims, as required by US and international law. There are also persistent allegations that US Border Patrol agents administering these fast-track deportations sometimes ignore the attempts of asylum seekers to secure protection.

Kelin R. (pseudonym) fled El Salvador in September 2015, with her 3-year-old daughter. At the US border, both were placed in expedited removal, a fast-track deportation procedure authorized by the 1996 laws. Like dozens of other people in fast-track procedures Human Rights Watch has interviewed, she disputes the contents of a statement produced by a US Border Patrol agent which says she came to the US to work and had no fear of returning to El Salvador.
“They were going to kill me and my family,” she said, referring to local police she said were in league with a street gang. “I didn’t [tell the Border Patrol] I came to work. I said I fled for my life.”

A full list of Human Rights Watch reports documenting the harm to immigrants and their families caused by the 1996 laws appears below.

The harm of AEDPA also goes beyond immigration policy, Human Rights Watch said. Notably, the law substantially limited the power of federal courts to consider petitions filed by prisoners alleging that they were wrongly convicted – including people on death row.

“Twenty years of unjust detention, deportation, and family separation is 20 years too much,” Parker said. “Let this be the last anniversary for these terrible laws.”

Locked Away: Immigration Detainees in Jails in the United States, September 1, 1998. Found that the then-new mandatory detention obligations of the 1996 laws drastically increased the use of immigration detention and that the US Immigration and Naturalization Service (INS) was holding more than half of its detainees in jails, where they are subjected to punitive treatment.

Family, Unvalued: Discrimination, Denial, and the Fate of Binational Same-Sex Couples under U.S. Law, May 1, 2006. Documented how AEDPA’s bar on asylum applications filed more than one year after an asylum seeker’s arrival harms people making claims based on their sexual orientation or gender identity.

Forced Apart: Families Separated and Immigrants Harmed by United States Deportation Policy, July 16, 2007. Documented how the substantial expansion of the criminal grounds for deportation in 1996 devastates communities across the nation, targeting not only undocumented immigrants but also long-term lawful permanent residents – green card holders – as well.

Forced Apart (By the Numbers): Non-Citizens Deported Mostly for Nonviolent Offenses, April 15, 2009. Found that three quarters of non-citizens deported, mostly due to the 1996 laws, after serving criminal sentences were convicted of nonviolent offenses, and that one in five had been in the country legally, some for decades.

Locked Up Far Away: The Transfer of Immigrants to Remote Detention Centers in the United States, December 2, 2009. Found that the 1996 laws made many more non-citizens subject to deportation and made it much more difficult for them to defend themselves.

Deportation by Default: Mental Disability, Unfair Hearings, and Indefinite Detention in the US Immigration System, July 25, 2010. Documented how the mandatory detention provisions of the 1996 laws cause unnecessary detention of people with mental disabilities, leading to abuses.

Tough, Fair, and Practical: A Human Rights Framework for Immigration Reform in the United States, July 8, 2010. Called for immigration reform that repeals the 1996 provisions authorizing fast-track deportations, limitations on the use of reasonable discretion for immigration judges, and arbitrary detention.

Costly and Unfair: Flaws in US Immigration Detention Policy, May 6, 2010. Described the “relatively unchecked” powers given to immigration enforcement authorities under the 1996 laws to detain many immigrants for prolonged periods.

Within Reach: A Roadmap for US Immigration Reform, May 1, 2013. Called for a US immigration system that respects and protects families and ensures due process.

At Least Let Them Work: The Denial of Work Authorization and Assistance for Asylum Seekers in the United States, November 12, 2013. Showed how IIRIRA prevents asylum seekers from working for at least six months, and often for years, while their claims are pending.

Torn Apart: Families and US Immigration Reform, July 24, 2014. Highlighted dramatic photographs of some of the millions of families affected by the 1996 laws.

You Don’t Have Rights Here: US Border Screenings and Returns of Central Americans to Risk of Serious Harm, October 16, 2014. Documented how fast-track border deportation procedures authorized by the 1996 laws deny migrants a genuine opportunity to claim asylum and place them at serious risk of harm.

A Price Too High: US Families Torn Apart by Deportations for Drug Offense, June 16, 2015. Documented how the 1996 laws prompt the US to routinely open deportation proceedings against legal residents and other immigrants with strong ties to US families.

Do You See How Much I’m Suffering Here?: Abuse against Transgender Women in US Immigration Detention, March 23, 2016. Documented how the 1996 provisions on mandatory detention and fast-track deportations contribute to unnecessary detention and harm to transgender women.