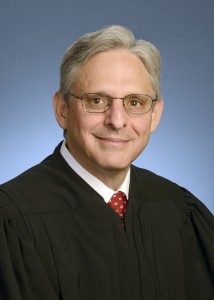 A few weeks ago, President Barrack Obama nominated U.S. Circuit Judge Merrick Garland to fill the vacancy on the Supreme Court left by Justice Antonin Scalia's untimely death.  If the Senate reviews the nomination in earnest, Judge Garland's opinions will be scrutinized.  We were unable to locate any published opinions by Judge Garland on immigration matters.  UC Davis law student Sadie Weller looks at Judge Garland's opinions on criminal justice and Guantanamo detainees.  Here is her report:

There is a good deal of uncertainty surrounding President Obama’s Supreme Court nominee, D.C. Circuit Chief Judge Merrick Garland, in terms of his stance on immigration. However, his stances on criminal appeals and Guantanamo cases have raised concern among liberal observers who might have desired something else from an Obama-nominated jurist. In taking a look at some of his D.C. Circuit opinions in these areas, it seems that Garland’s pro-prosecutor approach to criminal appeals and his apparent support of Guantanamo detention stands in contrast to some of Obama’s late-term objectives, including a recent plan to phase-out Guantanamo completely.

In the first D.C. Circuit review involving a Guantanamo detainee, Garland, the only Democratic-appointee on the panel, joined the opinion of Judge A. Raymond Randolph in holding that the federal courts did not have jurisdiction to hear this case. Al Odah v. U.S., 321 F.3d 1134 (D.C. Cir. 2003).  In agreeing with the Bush administration’s position, the circuit court opinion held that the right to litigate did not extend to detained noncitizens in military custody outside of United States territories. Upon writ of certiorari, the U.S. Supreme Court consolidated this case and held, in Rasul v. Bush, 542 U.S. 466 (2004), that noncitizens in detention at Guantanamo may bring petitions for writ of habeas corpus in the district courts.

Parhat v. Gates, 532 F.3d 834 (D.C. Cir. 2008), involved the review of Combatant Status Review Tribunal (CSRT) determination of a Gitmo detainee’s status as an enemy combatant. In his opinion for the court, Judge Garland found that the tribunal failed to meet the reliability of evidence standards required for such a determination under the Detainee Treatment Act. Garland engaged in an elemental analysis of the Department of Defense’s Order and the Navy Memorandum of 2004 defining an enemy combatant, and found that Parhat, an ethnic Uighur who fled from China and was living in Afghanistan during early post-9/11 U.S. airstrikes on the country, did not meet the requirements. Garland also denied the government’s motion to protect from public disclosure all non-classified record information regarding Parhat’s case because the government had failed to support the contention that the information fell into a protected category.

More in line with his typical Guantanamo stance, Garland deferred to the government and the District Court’s opinion denying habeas to a Guantanamo detainee in Al Alwi v. Obama, 653 F.3d 11 (D.C. Cir. 2011). With Boumediene v. Bush, 553 U.S. 723 (2008) decided during the District Court’s consideration of Al Alwi’s case, Al Alwi was entitled to a writ of habeas corpus, but the District Court denied the writ, relying in part on uncorroborated statements from Al Alwi. On appeal of factual conclusion and discovery handling at the trial level, Garland upheld, under clearly erroneous and abuse of discretion standards, every decision of the District Court, denying release to Al Alwi.

In another appeal of denial for writ of habeas corpus, Garland held, in Khan v. Obama, 655 F.3d 20 (D.C. Cir. 2011), that sufficient evidence existed to classify Shawali Khan as an enemy combatant under the Authorization for Use of Military Force (AUMF). Khan challenged the requisite findings of the district court that 1) he was a “part of” Hezb–i–Islami Gulbuddin (HIG), and 2) that HIG was “associated with” al Qaeda or the Taliban. The evidence relied upon to justify Khan’s capture came from three informants who alleged Khan’s involvement in attacks on U.S. military personnel and property, although none of them had personal knowledge of Khan or his particular involvement. Despite Khan’s denial that he hadn’t been involved with HIG since anti-Soviet efforts in the 1980s, Khan was detained at Guantanamo in 2003. Relying on his holding in Parhat and subsequent determinations that only “unreliable hearsay” would be discounted, Garland found that here, unlike in Parhat, the government set forth sufficiently reliable support for their contentions regarding Khan’s involvement with HIG. Under the “clear error” test, Garland affirmed the district court’s findings.

A year later, in Alsabri v. Obama, 684 F.3d 1298 (D.C. Cir. 2012), Garland again ruled against a Guantanamo detainee who appealed the lawfulness of his detention under the AUMF. Garland applied the Khan standard of authorizing detention of individuals who are “part of forces associated with Al Qaeda or the Taliban.” Reviewing the factual determinations of Alsabri’s reasons for moving to Afghanistan under clear error, Garland upheld the determination that Alsabri travelled to Afghanistan in order to fight with the Taliban or al Qaeda. Though the evidence supporting this conclusion was largely circumstantial (very similar to the facts of Al Alwi), Garland found that the high threshold of overturning such a decision on clear error was not present.

Garland’s criminal appeals opinions are, expectedly, more numerous than the opinions he wrote regarding Guantanamo petitioners, but a review of some of his most cited decisions quickly reveal his deference to convictions of the district court.  In one of Garland’s earlier criminal appeals cases, U.S. v. Webb, 255 F.3d 890 (D.C. Cir. 2001), he pays close attention to the “caveats” of Apprendi v. New Jersey (2000). to hold that the defendant did not suffer substantial injury under plain error review. Apprendi held that any fact, other than a prior conviction, that increases the penalty for a crime beyond the statutory maximum must be submitted to a jury. Garland declined to exercise the discretion granted to him by the four-pronged plain error analysis of Federal Rule of Criminal Procedure 52(b), electing not to take notice of the sentencing error not raised by Webb at trial. Garland dismissed Webb’s claim that, because his trial occurred before Apprendi was decided, he had no reason to contest the drug quantity used in his sentencing; at that time of Webb’s trial, drug quantity thresholds were considered elements of the offense and not sentencing factors. As for Webb’s Fourth Amendment claim, Garland admitted that the staleness of the warrant’s issuance was troubling, but, in deferential accordance of the suppression standard which asks whether the officers “could not have harbored an objectively reasonable belief in the existence of probable cause,” Garland declined to overrule the lower court’s admission of the evidence found.

In his opinions in U.S. v. Mejia, 448 F. 3d 436 (D.C. Cir. 2006) and U.S. v. Bras, 483 F. 3d 103 (D.C. Cir. 2007), Judge Garland responds to similar claims regarding sentencing fairness and the Sixth Amendment confrontation right in a criminal trial. In Mejia’s case, Garland upheld the conviction, dismissing Mejia’s constitutional claims, but remanded for sentencing based on the presence of obvious sentencing errors under Booker, which held that an enhancement of a defendant’s sentence under the mandatory Federal Sentencing Guidelines that depends on facts not submitted to the jury constitutes a Sixth Amendment violation. Upon review, the sentence must be vacated and the case remanded unless the errors were harmless. Given Garland’s usually low expectations from the government in proving “harmless error,” one wonders whether the Government’s own concession that this was not harmless error is to credit for the remand.

In response to Bras’s similar claim of an enhancement based on information not proved to a jury beyond a reasonable doubt, Garland relies on the portion of Booker’s holding that rendered the Guidelines merely “advisory.” Thus, the Sixth Amendment’s bar against judicial fact-finding does not apply to the Guidelines, and factors of enhancement need only be found by the judge by a preponderance of the evidence. Garland, expectedly, deferred to the District Court’s findings under this standard and upheld the conviction. Garland also rejected Bras’s Sixth Amendment confrontation challenge by adopting a narrow construction of Crawford v. Washington, which prohibits the admission of testimonial evidence absent unavailability of the witness and a prior opportunity for cross-examination. Asserting that Crawford did not apply to evidence admitted at sentencing hearings, Garland dismissed the second of Bras’s constitutional claims.

In U.S. v. Pettigrew, 346 F.3d. 1139 (D.C. Cir. 2003), Garland reviewed a claim that defendant’s 1997 drug conviction and sentences were unconstitutional under Apprendi v. New Jersey (the “precursor” to Booker). The Government in Pettigrew’s case argued that Apprendi did not apply retroactively, and even if it did, Pettigrew fatally failed to challenge the jury instruction at trial. Judge Garland was convinced by the second argument and found, unsurprisingly, that Pettigrew failed to meet his burden of proving prejudice by the Apprendi sentencing error (perhaps Judge Garland went this route because the D.C. Crcuit, in 2001, had held that the same conviction Pettigrew was appealing was improper under Apprendi unless the relevant drug threshold was proved beyond a reasonable doubt to the jury; precisely the injury Pettigrew alleged.) The judge in Pettigrew’s case had sentenced Pettigrew on the crime of distributing 50 grams or more of cocaine base, based on his own finding that Pettigrew had sold to an undercover officer 50.57 grams of crack. Judge Garland flatly rejected Pettigrew’s prejudice claim that the jury might have decided differently, based on this barely-over-threshold amount, than the judge had.

In reviewing some of Garland’s criminal appeals decisions, his deference to lower courts, and often, in turn, to the Government, quickly become evident. His hesitancy to overturn convictions borders on an unwillingness to do so. Though it would be imprudent to project what this pro-prosecution stance would mean for his immigration jurisprudence, the progressive-minded of the country should be hesitant to give Obama’s nomination their stamp of approval.