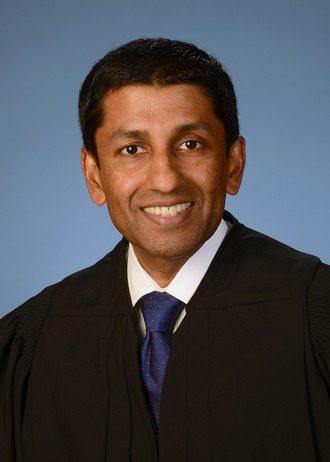 Justice Scalia's untimely death has led to much speculation who might be nominated to fill his seat on the Supreme Court.  One of the names mentiond as a possibility is Sri Srinivasan. Srinivasan was born in India and currently is a judge on the U.S. Court of Appeals for the District of Columbia Circuit. In May 2013, the U.S. Senate confirmed Srinivasan to the court of appeals by a vote of 97–0. Srinivasan previously served as Principal Deputy Solicitor General of the United States and argued 25 cases before the U.S. Supreme Court. After law school, Srinivasan served as a law clerk for U.S. Court of Appeals for the Fourth Circuit Judge J. Harvie Wilkinson III and then U.S. Supreme Court Associate Justice Sandra Day O'Connor.

Srinivasan did two stints at the law firm of O'Melveny & Myers.  While at the firm, Srinivasan was counsel of record in the case of Carachuri-Rosendo v. Holder, in which a unanimous Supreme Court held that a minor drug offense was not an "aggravated felony" under the immigration laws and did not trigger mandatory removal of a lawful permanent resident from the country.  Srinivasan convinced the Court to reverse a lower court ruling to the contrary.  Justice John Paul Stevens wrote the opinion for the Court; Justices Scalia and Thomas each filed an opinion concurring in the judgment.

The immigration statute makes lawful permanent residents convicted of an "aggravated felony"  ineligible for a form of relief from removal known as "cancellation of removal."  Such relief, if granted, permits the noncitizen to lawfully remain in the United States. Over the last several decades, Congress has progressively expanded the definition of an aggravated felony and thus subjected growing numbers of immigrants convicted of crimes to mandatory detention and removal.  The trend reflects the political unpopularity in Congress of noncitizens convicted of crimes, as well as the consistent popularity of tough enforcement measures directed at immigrants.

With congressional expansion of the criminal grounds for removal, combined with the executive branch's increased removal efforts directed at noncitizens convicted of crimes,  the U.S. government now removes from the country approximately 400,000 immigrants each year.  Many are lawful permanent residents convicted of relatively minor criminal offenses.  As one commentator has aptly observed, "[t]he deportation of 'criminal aliens' is now the driving force in American immigration enforcement. . . . In effect, federal immigration enforcement has become a criminal removal system."

Federal law provides that, when a person is convicted of possessing a controlled substance after a previous drug conviction, the prosecutor may seek what is known as a "recidivist enhancement," which converts the second misdemeanor into a felony conviction.  To secure such an enhancement, the prosecutor must comply with a number of procedural safeguards designed to protect the defendant.

The prosecutor failed to pursue a recidivist enhancement in Carachuri-Rosendo's second drug possession prosecution.  Nonetheless, the immigration court reasoned that, because Carachuri-Rosendo could have been prosecuted for a felony, he effectively had been convicted of an aggravated felony and, thus, was not eligible for cancellation of removal.  The BIA agreed.  The court of appeals denied Carachuri-Rosendo's petition for review of the removal order.  To resolve a conflict among the circuits, the Supreme Court granted certiorari.

In another opinion by Justice Stevens, the Court held that Carachuri-Rosendo's second minor drug possession offense did not constitute an aggravated felony and, thus, could not serve as grounds for automatic removal.  The Court found that, unless the second conviction is in fact based on a prior conviction (and the recidivist enhancement procedure followed), a misdemeanor drug possession offense cannot constitute an aggravated felony.

The Court reasoned that the U.S. government's position ignored the plain language of the INA, which only prohibits the award of cancellation of removal when a noncitizen "has . . . been convicted of a[n] aggravated felony."  The Court further observed that one does not ordinarily think of a ten-day sentence for unauthorized possession of a single prescription pill as an aggravated felony. 92 Citing 2004 precedent, the Court noted that courts should construe any ambiguities in criminal statutes cross-referenced in the immigration laws in favor of the noncitizen, a variation of the time-honored rule of lenity historically applied to the interpretation of penal laws.

Justices Scalia and Thomas each separately concurred in the judgment. Both Justices agreed with the holding of the majority. Each, however, would have reached the conclusion through slightly different analyses of the statutory text and relevant precedent.

In sum, the Supreme Court in Carachuri-Rosendo v. Holder engaged in unremarkable statutory interpretation of the immigration laws and rejected the U.S. government's reading of the statute.  A majority of the Court relied on a variant of the rule of lenity to interpret statutory ambiguities in favor of Carachuri-Rosendo and to find him eligible for relief from removal.

The Justices unanimously agreed on the ultimate disposition of the case. Following standard practice, the Supreme Court granted certiorari, vacated the judgments, and remanded for further consideration eighteen cases raising similar issues in light of its decision in Carachuri-Rosendo v. Holder.  The relatively large number of cases subject to the Court's ruling is a by-product of the Obama administration's concentrated efforts to remove noncitizens with criminal convictions.