Check out this report from the Center for American Progress about violence in Central America.

Central America’s Northern Triangle region—made up of El Salvador, Honduras, and Guatemala—has gained notoriety in recent years for its extreme levels of organized crime, gang violence, and poverty. As these problems have intensified, the number of people fleeing from the Northern Triangle to other countries has also skyrocketed. While lower than the surge in summer 2014, the uptick in the number of unaccompanied children and families arriving at the U.S.-Mexico border in the latter months of 2015 is still historically high and serves as a stark reminder of the region’s worsening conditions.

El Salvador, Honduras, and Guatemala were among the five most dangerous countries in the Western Hemisphere in 2015. While Honduras’ homicide rate has decreased over the past few years, El Salvador’s homicide rate has deteriorated significantly—making the country more than 24 times as dangerous than the United States. (see Figure 1). 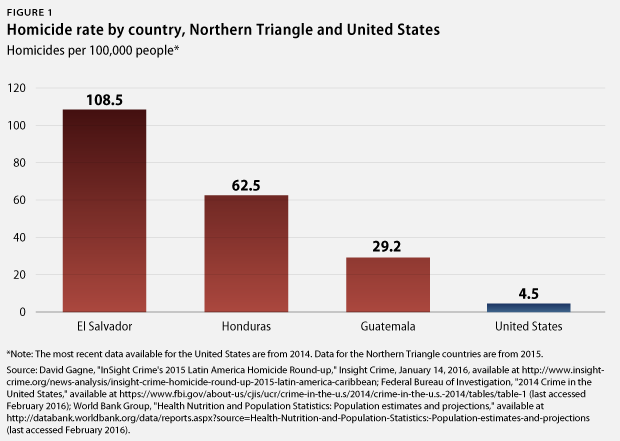