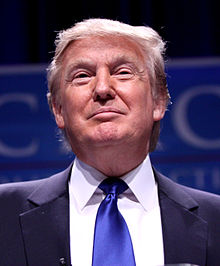 This op/ed in the National Law Journal offers my views on the lawfulness of Donald Trump's call to end to the admission of Muslims into the United States.   Here it is:

Donald Trump's immigration proposals, if you can call them that, are short on details but long on controversy. The presidential candidate kicked off his campaign by labeling immigrants from Mexico as criminals who should be removed in a mass deportation campaign akin to the now-discredited "Operation Wetback" — the U.S. government's official name for the campaign — in 1954.

Once again stirring the pot, Trump recently called for a blanket prohibition on all Muslim noncitizens from entering the United States. That would include temporary visitors, such as university students, as well as noncitizens seeking to become lawful permanent residents as spouses of U.S. citizens.

From a legal standpoint, the constitutionality of the race- and religion-based prescriptions endorsed by Trump is uncertain. Some legal scholars, including Temple Peter Spiro in The New York Times, have suggested that there is a legal basis for Trump's call for an end to Muslim immigration to the United States.

The U.S. Supreme Court's 1889 decision in The Chinese Exclusion Case created what is known as the "plenary power" doctrine, which immunizes from constitutional review the substantive immigration decisions of Congress and the executive branch. That doctrine allowed for the court to uphold the immigration law venomously known as the "Chinese Exclusion Act," whose very name stands as a monument to one of our darkest chapters in immigration history. Now discredited as discriminatory and based in racial animus, the act was designed to exclude Chinese immigrants from the United States. The laws were extended to bar immigration from much of Asia.

The Supreme Court has yet to overrule the plenary-power doctrine and the Chinese Exclusion Case. Many observers, however, believe that it is only a matter of time until the Supreme Court brings immigration law into the constitutional mainstream. Several indicators support that assessment. The court in recent years has rarely mentioned the plenary-power doctrine in its immigration decisions and, at times, has even stretched to ensure that noncitizens have the opportunity for some kind of judicial review of immigration decisions.

True, the Supreme Court has not revisited the Chinese Exclusion Case and, as lawyers and law professors like to say, it remains "good law." However, the court has not had a chance to revisit the precedent.

Political sensibilities have changed so much that Congress has not passed such a bold proposal to ban, for example, the admission of Muslim noncitizens to the United States. Nor has the executive branch expressly targeted Mexican immigrants, as Donald Trump seemingly would, for removal.

In recent years, despite serious concerns about terrorism, no political leader has sought the kinds of overbroad immigration restrictions that Donald Trump has endorsed. Consider that after Sept. 11, 2001, when the nation understandably was tense and fearful, the Bush administration pursued a "special registration" program.

Known as the National Security Entry-Exit Registration System, it required the registration of certain noncitizens, focusing almost exclusively on noncitizens from nations populated predominantly by Muslims. Registration included fingerprinting and photographing as well as interviews. Noncitizens who registered were required to provide detailed information about their plans and to update federal authorities of a change in plans. They were only permitted to enter and depart the United States through designated ports of entry.

Several courts of appeals rejected constitutional challenges to the special registration program but the cases never were taken up by the Supreme Court. Still, the courts took the challenges seriously and found that the U.S. government's actions in response to real national security concerns were rational.

Special registration was criticized in many circles. Still, it is a much more modest and narrowly tailored response based on nationality to concerns with terrorism than Trump's call for the ban on all Muslims. That those measures withstood judicial review should not be read as suggesting that a ban on Muslim migration might pass constitutional ­muster.

The nation has come a long way in terms of racial, ethnic and religious sensibilities since the days of Chinese exclusion and Operation Wetback. It is difficult to believe that the courts today would uphold a ban in Muslim migration to the United States — national security concerns or not. Applying minimal judicial review, the Roberts Court would likely find that Trump's proposal lacked a rational basis and thus was unconstitutional.

In the end, while Trump's bombastic attacks on immigrants might make political hay, one can hope that the American legal system has evolved to a point where anti-immigrant horror stories such as the Chinese Exclusion Act are parts of our history, not present.