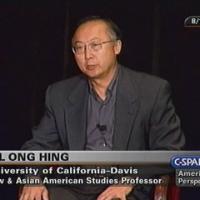 The article lays out the case for how the United States helped to created the Cambodian refugee crisis as a byproduct of our involvement in the Vietnam War. It documents the ways in which the United States sought to resettle Cambodian refugees stateside and the problems that resulted from resettlement in inner-city neighborhoods, "where crime was rampant and culture was radically different." Hing draws a direct link between resettlement efforts that were not well thought out and the fact that many of the refugee children ended up involved in crime.

Hing strongly "challenges the moral basis for these deportations and asks whether justice is really being served." He concludes:

In our hearts, we know that removal is not always appropriate, especially when our country bears culpability for creating the problem. In our souls, we know that when we repatriate Cambodian refugees, we further destroy a family at a time when the family needs, more than ever before, to be whole.

It's a powerful article. One that pairs wonderfully with the PBS documentary Sentenced Home. I strongly recommend both.