From the Bookshelves: The Economics of Immigration: Market-Based Approaches, Social Science, and Public Policy by Benjamin Powell, editor 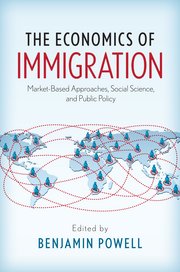 The Economics of Immigration summarizes the best social science studying the actual impact of immigration, which is found to be at odds with popular fears. Greater flows of immigration have the potential to substantially increase world income and reduce extreme poverty. Existing evidence indicates that immigration slightly enhances the wealth of natives born in destination countries while doing little to harm the job prospects or reduce the wages of most of the native-born population. Similarly, although a matter of debate, most credible scholarly estimates of the net fiscal impact of current migration find only small positive or negative impacts. Importantly, current generations of immigrants do not appear to be assimilating more slowly than prior waves. Although the range of debate on the consequences of immigration is much narrower in scholarly circles than in the general public, that does not mean that all social scientists agree on what a desirable immigration policy embodies. The second half of this book contains three chapters, each by a social scientist who is knowledgeable of the scholarship summarized in the first half of the book, which argue for very different policy immigration policies. One proposes to significantly cut current levels of immigration. Another suggests an auction market for immigration permits. The third proposes open borders. The final chapter surveys the policy opinions of other immigration experts and explores the factors that lead reasonable social scientists to disagree on matters of immigration policy.

4. The Civic and Cultural Assimilation of Immigrants to the United States   Jacob Vigdor

7. Immigration's Future: A Pathway to Legalization and Assimilation  Herbert London