From the Bookshelves: Refugees from Armed Conflict: The 1951 Refugee Convention and International Humanitarian Law by Vanessa Holzer 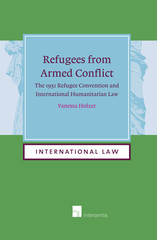