The Baby Jesus and the Syrian Refugee Crisis 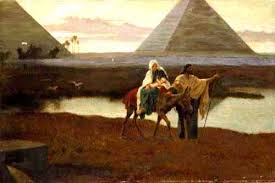 In today’s New York Times, Nicholas Kristof asks how today’s Congress would have treated the infant Jesus when Mary and Joseph were fleeing persecution in Egypt:  “According to the Gospel of Matthew, after Jesus’ birth they fled to save Jesus from murderous King Herod (perhaps the 2,000-year-ago equivalent of Bashar al-Assad of Syria?). Fortunately Joseph, Mary and Jesus found de facto asylum in Egypt — thank goodness House Republicans weren’t in charge when Jesus was a refugee!”  Kristof is referring specifically to Matthew 2:13-18 (“[An] angel of the Lord appeared to Joseph in a dream.  ‘Get up,’ he said, ‘take the child and his mother and escape to Egypt.  Stay there until I tell you, for Herod is going to search for the child to kill him.’”)

The opposition to the admission of Syrian refugees to the United States has appeared in multiple, ugly variations, from a Syrian refugee family being rerouted from Indiana to Connecticut after the State of Indiana declared that it would ban Syrian refugees, to Roanoke, VA mayor David Bowers favorably citing the Japanese internment camps from WWII in his comments about barring Syrian refugee admissions (remarks for which he later apologized).

But a broad coalition of US spiritual leaders – including evangelical Christians – have condemned proposals to ban Syrian refugees and have invoked similar scriptural bases for extending compassion to Syrian refugees.  The National Association of Evangelicals has, for instance, issued a statement supporting the continued admission of Syrian refugees to the US.  And on Friday, the Evangelical Immigration Table – an evangelical Christian coalition that has supported comprehensive immigration reform -  held a national conference call for faith leaders across the country to receive information and resources on the refugee crisis.

Many commentators have pointed out the absence of rationality at the heart of many recent reactions to the Syrian refugee crisis.  US politicians who purport to follow Christianity might also recall the following words of Jesus Christ, from Matthew 25:

44 “They also will answer, ‘Lord, when did we see you hungry or thirsty or a stranger or needing clothes or sick or in prison, and did not help you?’