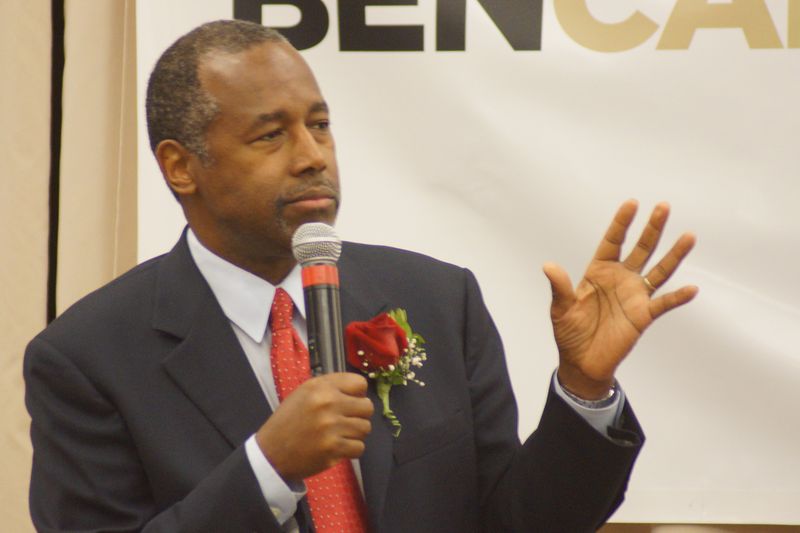 Ben Carson outlined some pretty wild immigration policies this week. Mother Jones has coverage of it.

Carson is in favor of "securing our borders." He's in favor of a "double-fence" at the border, putting "border guards on the border," and prosecuting first-time offenders. "You can get pretty close to 100%." (I think he means a 100% closed border, which literally no one thinks is possible.)

Okay, that sounds a whole lot like Trump. Nothing too new.

But Carson takes a sharp detour from the current Republican front runner with his plan for the millions currently living in the United States without authorization. Carson, unlike Trump, would not rush to deport them. He would give them 6 months to "register" - they would be "criminals" if they did not register. Then, if they have a "pristine record," pay a back-tax penalty, and pay taxes going forward, they could become "guest workers," no longer living in the shadows.

Carson believes that it's in the interests of large-scale farmers and hotel owners (!) to keep these potential guest workers in the country.

And he would give these guest workers the right to vote! Let's pause to soak that in.

He goes on to emphasize that the new guest workers wouldn't be citizens. To get citizenship they would have to go through the process of becoming a citizen like "anyone else" including "leaving the country." Huh? So you'd go from a nonimmigrant to a citizen like magic with no LPR stop along the way? And what's with leaving the country? Would we abolish adjustment of status?

Of course, in politician speak, he adds "unless the American people indicate that they want a different course from that."

And finally, this. Here's the Mother Jones summary of Carson's plan to deter migrants from wanting to come to the United States in the first place:

The answer to stemming the (alleged) tide of undocumented workers coming from the south is easy, he suggested: US companies simply need to set up shop in Central and South America and teach them how to farm. His model, he said, is Cameroon, where US agribusiness firms are "helping to develop millions of acres and incredibly fertile land, growing record crops, [and] getting big profits," which, he added, "is great for them; I like business."